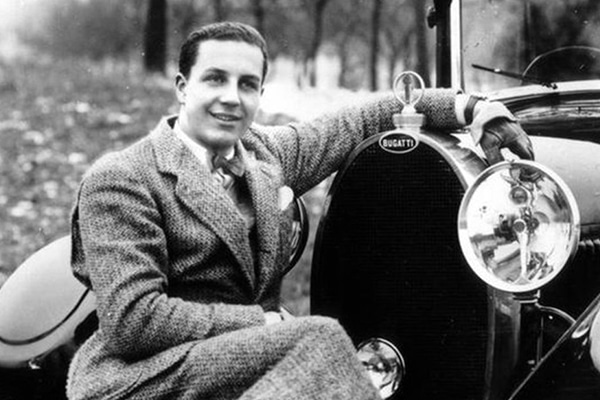 Through all the misadventures which have beset the Bugatti marque during its life, the shadow of Jean Bugatti has always loomed large, haunting the designers charged with upholding the legend.

Ettore Bugatti was neither an artist nor an engineer, but rather a brilliant mechanic who invented his own technically sophisticated style. Intuition took the place of the training as an engineer which he had never received. The “Boss”, as his employees called him, produced countless sketches. “Drawing is the only great master in car manufacturing”, he declared.

Alongside him, his son Jean provided direction for the design and technical work and oversaw the industrial operations.

Art and engineering were never better combined than by Ettore Bugatti with the help of Jean. Their subconscious quest for a beauty resulting from the pursuit of technology determined the very essence of the cars they produced. That remains the case in 2019 …

On 14 January 1909, Gianoberto Carlo Rembrandt Ettore Bugatti, known as Jean, was born. He lived little more than 30 years but brought an original and respectful view to bear on the work of his father, which he faithfully carried forward. The golden age
From 1927 onwards, Jean Bugatti took an active part in the running of the factory, setting up that year the bodyshop. Going forward, he was directly involved in planning and styling the cars. One of the first models he created was a Type 40 with very special bodywork. Unknown to his father, Jean devised a remarkable body in the workshop where “The Boss” usually had his horse-drawn carriages built. Its bodywork reproduced in almost every aspect the characteristics of a horse-drawn coupé … Inside the factory at Molsheim, Jean Bugatti had a small workshop which he visited every day to choose the direction to be taken, give recommendations to the draughtsman and make suggestions.

During the social upheaval of the Popular Front, Ettore Bugatti decided to move away from Molsheim and withdraw to Paris. Jean therefore found himself on his own in charge of the factory at a critical time, when the 57 range was at its height commercially and in motorsport.

The “Aérolithe” – a prototype which prefigured the Atlantic – would remain his masterpiece. Its styling contrasted with contemporary designs on account of its deliberately uncluttered appearance. On Bugatti’s coupé, no ornaments or chrome trim were added, there was no play of colours. Only the riveted seams, encircling the front and rear wings and following the car’s centre line without interruption from the radiator to the tip of the body at the rear, dividing the windscreen in two and forming a ridge on the rounded tail, stood out. Immediately after the Paris Motor Show, the Bugatti “Aérolithe” was shipped to London to be displayed on Bugatti’s stand at Olympia; it gave rise to just four production versions of the Atlantic, to which “La Voiture Noire” refers today.

Jean Bugatti’s destiny came to a brutal end on 11 August on a straight road … That evening, he wanted to test the 57 which was due to compete in the Grand Prix de la Baule scheduled to take place on 3 September 1939. At dusk, as night fell, he set out on a high-speed test run on a section of main road between Duppigheim and Entzheim, a stone’s throw from the factory. The “Tank” was travelling at over 120 mph when Jean Bugatti noticed a bicycle at the side of the road. He swerved to avoid it and lost control of the heavy machine. The cyclist escaped unhurt; Jean did not. Today, when the designers imagine a Bugatti for the 21st century, Jean’s ghost still lives within them …