Focus on Bugatti, In praise of elitism 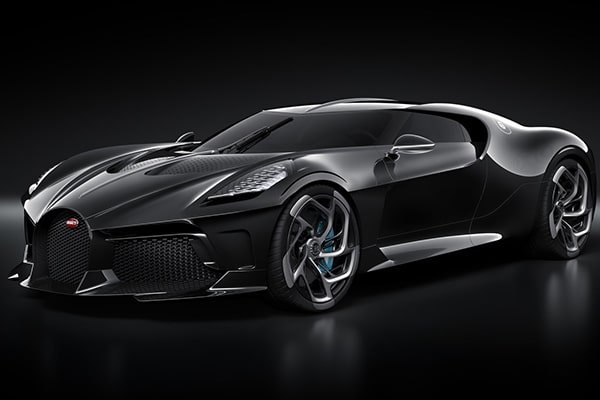 Focus on Bugatti, In praise of elitism

Bugatti’s vocation is to satisfy those customers who most ardently desire exclusivity. With “La Voiture Noire” (The Black Car), the company from Alsace takes this concept to its extreme.

It is impossible not to think of it when you discover Bugatti’s latest creation, simply named “La Voiture Noire” and intended to be the heir to a very French tradition of elegance … At a press conference last March, Stephan Winkelmann, Bugatti’s current president, affirmed the marque’s Frenchness. A fine example of self-denial when you think of Bugatti’s extremely international life: it should not be forgotten that Ettore Bugatti came from Italy, or more exactly from Lombardy, and that he only acquired French nationality shortly before his death in 1947. It should also be remembered that the Bugatti marque came into being in 1909 when Alsace was still part of Germany … It returned to German ownership in 1998, when it became part of the Volkswagen group.

As for Stephan Winkelmann, he is the most Italian of German citizens: he headed Lamborghini for many years, has an excellent command of Italian and wears perfectly cut suits from Zegna. Unveiled at the Geneva Motor Show last March, “La Voiture Noire” was created to mark the 110th anniversary of the birth of the Bugatti make. At the same time, Bugatti launched a series of 20 examples of the Chiron Sport, which made a number of references to France with several tricolour details in its interior design …

“La Voiture Noire” pays tribute to the legendary Bugatti Type 57 SC Atlantic, of which only four cars were built. According to Bugatti’s official press release, “This one-off model has already been sold for 11 million euros, making it the most expensive car in the world”. With “La Voiture Noire”, the Alsatian company confirmed that one of the missions of any manufacturer of supercars is not only to produce series in very limited numbers, but also to create unique models for the most demanding of customers.

That is the case for “La Voiture Noire”, but the identity of its lucky owner (who also commissioned the car) has not been officially divulged. “La Voiture Noire” is based mechanically on the Chiron and therefore carries over its 16-cylinder 8-litre engine developing 1500bhp! Its exterior design was completely rethought and owes nothing to the Chiron. It is much slimmer in profile with a longer bonnet and more subtle styling. From the side, the Chiron’s powerful circular arc is here toned down and transformed into a magnificent flowing movement which surrounds the side windows and merges into a clean, well-structured beltline.

Recalling the Atlantic, a central rib runs the full length of the body, but “La Voiture Noire” does not indulge in any form of nostalgia. The spirit of the Atlantic is recreated by the rigour of the car as a whole, which is emphasised by the choice of black paintwork.

Unfortunately, in the setting of the Geneva Motor Show with interference from many different lighting sources, it was difficult to see the car’s true beauty. That would have been very different at the Invalides … Its well-chosen lines, the treatment of its overall shape and the play of light and shadow would all be set off under the dome of the Invalides with its pure, natural light. Let’s cross our fingers and hope we will welcome it there in February 2020!