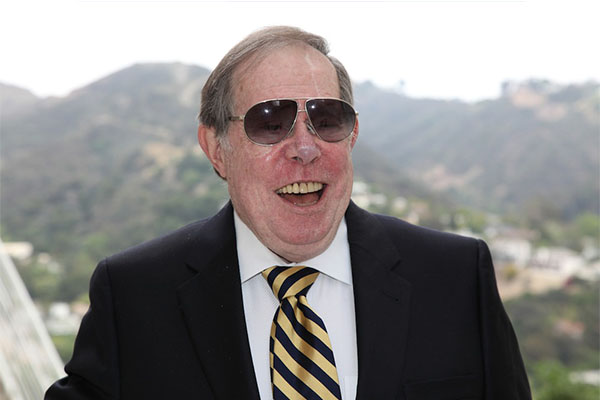 Syd Mead was unknown to the general public and yet at some stage all of us were transported into his imaginary world. He died a few weeks ago, but neither the cinema nor the car industry took the time to pay tribute to him.

Sydney Jay Mead, known as Syd Mead, was born on 18 July 1933 at St. Paul in Minnesota. He studied at the Art Center School, which in 1965 would become the renowned Art Center College of Design (today known simply as the ArtCenter). The school was founded on West Seventh Street in Los Angeles in 1930 and opened a section devoted to car design in 1948.

Since 1976, the ArtCenter has been located in Pasadena, on the outskirts of Los Angeles, in buildings conceived by the architect Craig Elwood. Having taught there myself for a few months, I recall a particularly idyllic campus … A huge number of designers now working throughout the world started off at the ArtCenter.

When Mead graduated in 1959, the United States and the Soviet Union were still divided by the Cold War, but during the following decade, the rivalry between the two blocs took a different turn. The situation began to thaw, the arms race slowed and relations returned to normal. The political leaders no longer avoided each other: Lyndon B. Johnson met Alexei Kosygin and Richard Nixon drew closer to Leonid Brezhnev.

The space race became a new focus for competition. With its first manned spaceflights, Russia launched an unprecedented rivalry between East and West against a backdrop of political, diplomatic and military tensions, which were not set to diminish.

The imagery associated with the exploration of space had a considerable influence on the American car industry. After borrowing elements of their design language from aeronautics, the designers lost no time in giving their concept cars a rocket-like appearance!

From Ford’s FX-Atmos to General Motors’ Firebird III, many of their projects mimicked space rockets. Dreams had different meanings on the two sides of the pond, as American society was based on the premise that its dreams would be fulfilled. When GM presented its Firebirds, America was well and truly preparing to go into space, while in Europe intergalactic fantasies were still the realm of fiction. Europe remembered Jules Verne, while America was spurred on by the promises made by NASA.

Mead was fascinated by this science fiction-like atmosphere. After completing his studies, he was taken on by the Ford Motor Company in the Styling Office run by George Walker from 1955 to 1961.

For the Gyron project, Mead worked with another renowned designer, Alex Tremulis, who had designed the Tucker, the subject of a film by Francis Ford Coppola, in 1947.

Presented in April 1961, the Ford Gyron was a single-seat vehicle with two wheels arranged in tandem, its balance ensured by means of a gyroscopic stabiliser. An electronic brain took care of driving it automatically, navigation functions and all those jobs which would normally be the driver’s responsibility …

Mead soon turned to the world of cinema. He created studio environments, sets, costumes and vehicles for Star Trek, Aliens and Blade Runner … He worked as a freelance for Philips Electronics and United States Steel. In 1970, he established his own studio, Syd Mead Inc., and settled in California. He worked with a host of production companies: Walt Disney Picture, Warner Bros., Paramount, Lucas Film, DreamWorks, National Geographic and Discovery Channel. He contributed to the development of numerous video games for Microsoft, Apple, Sony, Panasonic and SEGA.

In 1979, Mead published Sentinel, a collection of illustrations which revealed the artist’s futuristic universe.

In 2017, Mead received a Lifetime Achievement Award in recognition of his entire career. He worked on the campaign for the 1972 Imperial and, in 1984, on the interior design for the private jets of the ruling families in Oman, Saudi Arabia and the Sultanate of Brunei. 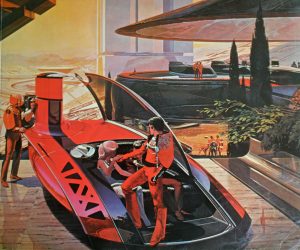 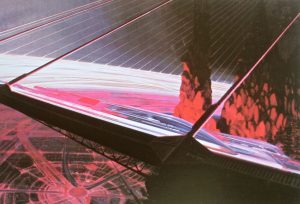 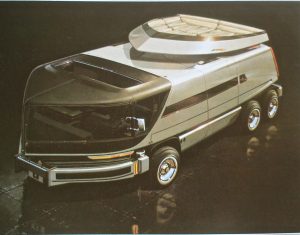 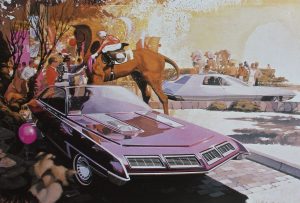 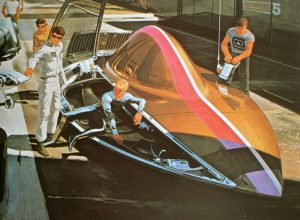 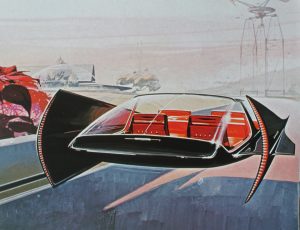 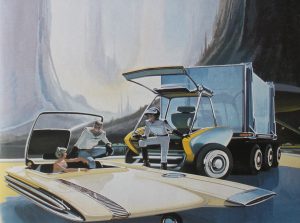