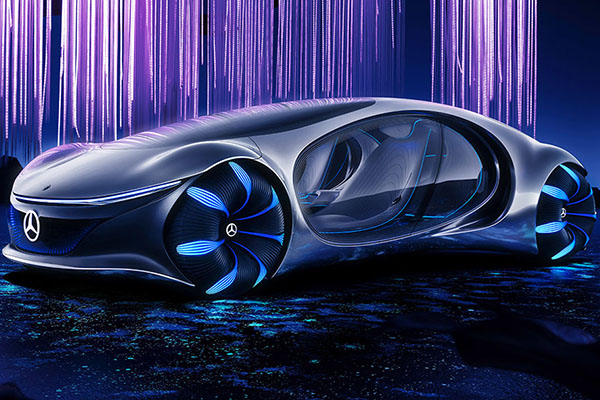 Life goes on in designers’ imaginations even though they cannot express themselves in their studios. While the car industry is on hold, we provide an update on the concept cars created before the pandemic brought the world to a standstill.

It was the end of January, it was aeons ago. We were all delighted that the Festival Automobile International had succeeded in overcoming the difficulties that lay in store. The event had taken place despite the ever-present threat posed by the yellow-vested protestors (the “gilets jaunes”), who had no hesitation in approaching the Invalides. The exhibition of concept cars attracted an ever greater and more enthusiastic public, while more designers than ever came from across the world. As the guests left the Lutetia Hotel after the Paris Designers’ Lunch, they all promised to meet up in Geneva in a month’s time.

But the coronavirus pandemic would decide otherwise.

On Friday 28 February, less than a week before it was due to open to the public, the organisers of the Geneva International Motor Show announced that it had been cancelled.

The car makers improvised a series of impromptu online press conferences to reveal the new models they had prepared for the show. After these updates, the usual flood of press releases was put on hold.

In these times, as tragic as they are unusual, let us try to keep abreast of what has been happening. On our website, under the heading “Between the Lines”, we will continue to keep you posted on the new concept cars which appeared before the global health crisis brought all industrial activity to a stop.

In this exceptional period, during which the car industry has come to a standstill, we present an overview of the new concept cars which were announced in the first three months of the year.

BMW i4
This magnificent saloon follows in the tradition of the company’s handsome large executive cars, and in particular the 8-Series Gran Turismo. It is a concept car which prefigures very clearly the forthcoming large saloon from the i department. It has flowing, uncluttered lines, its only aggressive feature being the radiator grille, whose new shape is expected to be adopted on the company’s future models. The i4 should go on sale in 2021 with a range of 370 miles and maximum power of 530 bhp. For its part, the fantastic hybrid i8, introduced in 2014, will bow out in April, after 20,000 cars have been built. 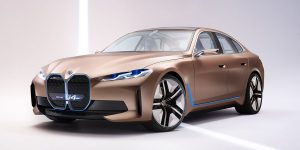 POLESTAR PRECEPT
This slender and elegant saloon marks the arrival of this new brand, a spin-off from Volvo, in the same segment as the Tesla S and Porsche Taycan. While Polestar’s styling, led by Maximilian Missoni, is uncontroversial, the materials used inside the car are highly innovative, with linen-based composites developed by the Swiss company Bcomp for the interior panels and seat backs. These save weight and reduce plastic waste by as much as 80%. The seating surfaces are woven in 3D using recycled PET bottles and the head restraints are made from recycled cork, while the carpets use discarded fishing nets collected in the ports … 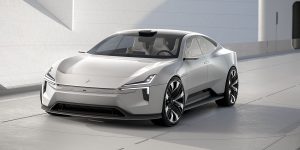 HYUNDAI PROPHECY
The success enjoyed by the Tesla S since it was launched in 2014 has encouraged many manufacturers to take a keen interest in the market for large electric saloons. For many projects in this segment, flowing lines have been their watchword. Hyundai has in turn followed this precept with its Prophecy, which features an attractively contoured waistline and the smooth surfaces of a Henry Moore sculpture. Some components are made from a transparent acrylic material allowing the onlooker to make out the functional elements inside. The concept makes provision for the possibility of autonomous use. 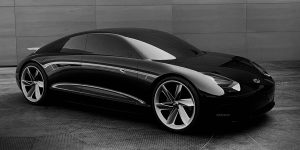 MERCEDES-BENZ AVTR
For the Consumer Electronics Show in Las Vegas, Mercedes-Benz chose to look resolutely to the future and to utopia. It consulted the teams who worked on Avatar, James Cameron’s film, to develop its strange AVTR concept. The interior of the prototype is trimmed in non-animal leather. Artificial intelligence and biometric recognition are omnipresent in this autonomous vehicle. Its organic shape harks back to the finest hours of bio-design, with an enormous egg-shaped glass panel opening along the entire length of the car. 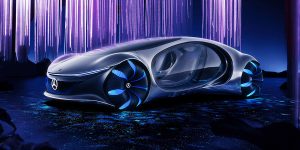 RENAULT MORPHOZ
Planned to be shown at Geneva, this project is both complex and appealing. Far more than its design, which is very conventional, it is the very concept of the car which is surprising. The electrically powered Morphoz can in effect be lengthened by some 16 inches to increase the space inside and to accommodate a larger battery pack. In its City version, it is 173 in long, but in Travel mode this increases to 189 in. Renault’s designers succumbed to a recurring temptation, that of seeking to create a modular car. 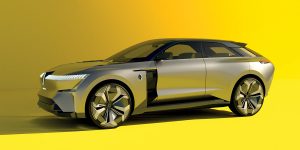 DS AERO SPORT LOUNGE
The position taken by DS Automobiles seems strange, as it unveiled a wholly uncontroversial up-market saloon, the DS 9, as part of its product range, and yet at the same time showed a very aggressive view of the future, in the shape of its Aero Sport Lounge, an SUV with sharply chiselled lines. Proof that unstructured shapes and sharp creases were no longer the sole preserve of Lexus! The Aero Sport Lounge has an electric powertrain developing 680 bhp. 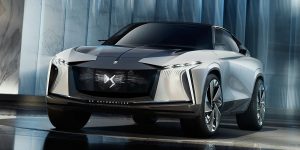 GFG BANDINI DORA
Fabrizio and Giorgetto Giugiaro are in fine form. They had planned to unveil three spectacular projects at the Geneva Motor Show. The Dora is a tribute to the small firm Bandini, which built racing cars during the 1950s. It is a true open-topped roadster with space for two, its profile framed by two long arches starting from above the front wheels. Its electric motors produce 544 bhp. 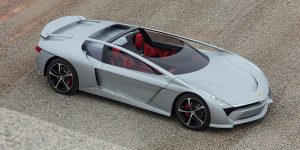 GFG VISION 2030 DESERT RAID
Previewed at Riyadh in November 2019, the Vision 2030 study was developed in collaboration with Saudi Arabia. It is an SUV sports coupé along the lines of the Kangaroo from 2019, which can exist in two forms, one specifically designed to be driven on-road and the other intended for off-road use. In this guise, the Vision 2030 then sits atop huge wheels which provide a ground clearance of 9.4 in. Its electric powertrain delivers 510 bhp. 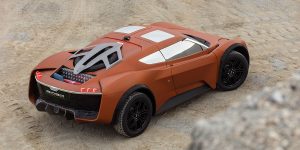