Close-up on VOLKSWAGEN I.D. R The peak of design 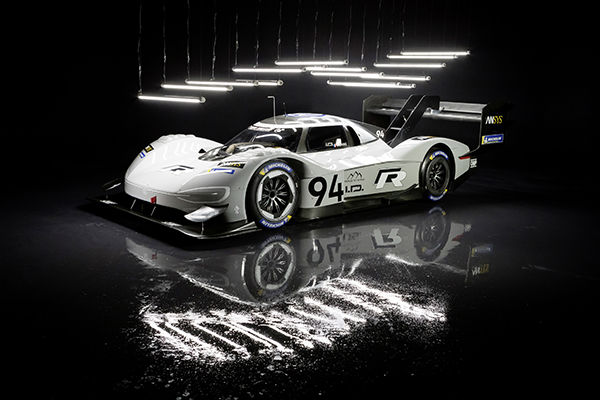 Close-up on VOLKSWAGEN I.D. R The peak of design

Sometimes, the realm of design encounters the world of sport. This meeting of different genres is extremely rare, but this year it gave birth to a remarkable racing machine.

You can count the number of racing cars which have passed through a design studio on the fingers of one hand. It is rare indeed for concept cars to lead to racing machines. Among those that have done so are the memorable Peugeot 905 and Mitsubishi Pajero Evolution. The Ford GT40 ­– originally sketched by the designers in Dearborn – might also be mentioned.

This year, it was on the slopes of Pikes Peak in Colorado that spectators could see a racing car which not only delivered amazing performance but was exceedingly attractive: the Volkswagen I.D. R with which Romain Dumas shattered the record for the legendary hill climb … On 24 June 2018, the sports prototype covered the 12.4 miles and 156 corners leading to an altitude of 14,100 feet in 7 minutes and 57.148 seconds. The record had been beaten! Three weeks later, the same team confirmed its potential during the Festival of Speed at Goodwood … In 2018, he drove for the Manthey Racing team in the Blancpain GT Series Endurance Cup behind the wheel of a Porsche 911 GT3-R, while also taking care of the development of the future Cayman GT4 for rallying.

Dumas can demonstrate his brilliance too in dazzling events like the legendary hill climb at Pikes Peak in Colorado, which he has won on four occasions, in 2014, 2016, 2017 and 2018. He claimed his first three victories driving cars produced by Norma Auto Concept, a company established in 1991 by Norbert Santos, who built his first prototype in his workshops at Saint-Pé-de-Bigorre, in the Pyrenees, in 1983.

In 2013, for his second attempt at Pikes Peak, Dumas entered a Norma M20RC. This time, Sébastien Loeb won, but Dumas returned in 2014 and claimed victory. He was again successful in 2016, driving the same car equipped with four-wheel drive. And again in 2017, with the Norma MXX RD Limited, which had been further developed in aerodynamic terms. That was all it took for Volkswagen’s motorsport managers, who were looking to make a splash, to turn to Dumas and continue the adventure under their name.

François-Xavier Demaison, Volkswagen’s technical director, took charge of the prototype, converted it to use electric power and entrusted it to the design studio in Wolfsburg run by Klaus Bischoff, leaving him to conceive a style which was in keeping with VW’s strategy. Efficiency and good looks came together in the designers’ work. The result was a magnificent body following on from the series of “I.D.” prototypes (the Buzz, Crozz and Vizzion …). All these models, including the I.D. R, share the same formal language which emphasises pure lines and gentle contours. For the sake of efficiency, however, the I.D. R had to accommodate some unwieldy aerodynamic equipment: a wide splitter at the front and a bulky spoiler extending behind the rear axle line. The car’s aerodynamics were honed in the wind tunnel at Porsche’s research centre in Weissach.

The final car, endowed with 680bhp and maximum torque of 650Nm for a weight of 1100kg (2425lb), was unveiled in April 2018 at Alès, RD Limited’s fiefdom. It ran for the first time on the track at the Pôle mécanique des Cévennes before heading off for Colorado.