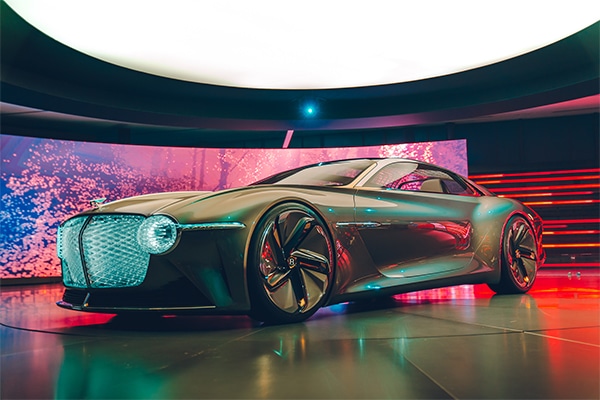 Like Rolls-Royce and Maybach, one of the most prestigious brands in the automotive industry is optimistic about the future. To crown its centenary, Bentley presents its vision of luxury with great panache.

To celebrate its centenary, Bentley has tastefully chosen not to look back at its past and serve up one of those facile stylistic exercises with a retro look to which most manufacturers resort.

With its EXP 100 GT project, Bentley has elected instead to explore two approaches which threaten the future of the car in the shorter or longer term: electric power and autonomous driving.

The reservations to which electric power and its side-effects give rise, as well as the many difficulties associated with managing a fleet of cars made up of vehicles driven by humans and others controlled by computers … All these issues are still to be resolved.

The advantage of concept cars, however, is that they can overcome all these future dilemmas by means of a miraculous declaration.

For those who complain about the limited range of electric cars, Bentley has announced it will go 700km (435mi) between charges. The technology used allows the batteries to be recharged to 80% of their capacity in just 15 minutes. And for those who fear that they will no longer savour the pleasure of driving, Bentley retorts by assuring them that the EXP 100 GT will allow them to drive their limousine whenever they choose. The design of the EXP 100 GT was led by Stefan Sielaff’s team. This imposing GT saloon is 5.80m (228in) long and 2.40m (94in) wide. The design cues which make it a true Bentley are present. Its general outline amplifies the design of the production models, especially the brand-new Flying Spur. Passengers enter the close-coupled interior of this coupé with its three seats in a triangular layout by means of a scissor-like door. The front of the car is dazzling, with its two jewel-like headlamps encroaching onto the square mesh grille, which is more imposing than ever. For the trim elements, the designers have made restrained use of copper and aluminium.

Inside, Bentley has been innovative in its use of materials, bringing environmental concerns to the fore and playing on the notion of lightness, which must be considered the true definition of luxury for the future. The “Copper-infused Riverwood” comes from trees which fell naturally and have been preserved for 5000 years in lakes, rivers and peat-bogs. The paint was produced using rice husks. The natural material which takes the place of leather comes from the process of making wine. Bentley worked with the Scottish company Bridge of Weir to produce natural leathers which are not harmful to the environment … To this list may be added the “Cumbria” crystal used for the décor and the wool for the carpets.

In this way, Bentley intends to uphold its traditions of quality and sophistication in its choice of materials, while demonstrating a responsible attitude to the environment.

The system to purify the air makes use of delicate fragrances combining sandalwood and fresh moss and were specially developed for the Bentley EXP 100 GT.

Artificial intelligence plays its part in bringing out human creativity, emotion and experiences, while the designers let the Bentley Personal Assistant take care of all the chores!

Concept cars have the best of intentions! Indeed, in the domain of futurology, the same avenues are explored by all the manufacturers. The Bentley’s chassis has been designed from the start to receive an electric powertrain. An overall reduction in weight has been targeted through the use of carbon-fibre and aluminium. Following the time-honoured expression when speaking of prestige cars such as this, it is intended to combine the charm of a car built by craftsmen with the most advanced technology of its time. The performance figures quoted by Bentley are mouth-watering: in theory, the EXP 100 GT – which weighs 1900kg (4189lb) – can accelerate from 0-100km/h (62mph) in 2.5 seconds, on its way to a top speed close to 300km/h (186mph).

Bentley has set the goal of putting a vehicle comparable to the EXP 100 GT into industrial production by 2035.