Close-up on Stefan SIELAFF, The face of Bentley 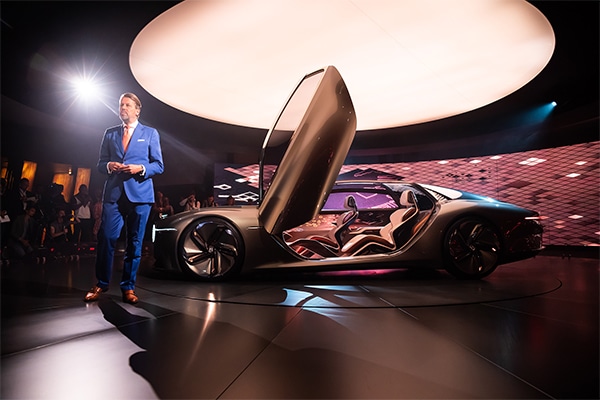 Close-up on Stefan SIELAFF, The face of Bentley

The man who today presides over the fate of Bentley’s design is Stefan Sielaff. His tall and elegant figure has long been seen at international events, as he previously worked for many European design studios.

Born on 7 January 1962 in Munich, Stefan Sielaff studied design at the Royal College of Art, that highly respected British institution in the heart of London. After qualifying there, he began his career at Audi in 1990.

At the time, it was Hartmut Warkuss, as impressive and influential a figure as any, who ruled over the design department at Audi. Sielaff worked initially in the main studio at Audi’s head office in Ingolstadt. After this, he was assigned to the Munich studio, which worked mainly on peripheral projects.

In 1995, Sielaff was appointed to help Erwin Himmel in the new design studio which Volkswagen had set up at Sitges in Catalonia. This unit was intended to reflect on long-term projects for all the brands in the group. The new team complemented the numerous studios which the group had already established around the world. Many highly regarded designers spent time at Sitges, including Jean-Pierre Ploué (PSA), Oliver Stefani (Škoda), Julian Thomson (Jaguar) and Achim Anscheidt (Bugatti).

As well as Volkswagen’s studios in Wolfsburg, those of Audi in Ingolstadt and Munich, of Škoda in the Czech Republic, of Seat in Spain and of Bentley in Great Britain, there were satellite studios at Simi Valley in California and in Argentina. It all added up to an impressive creative force which would be placed under the leadership of Warkuss …

Sielaff spent only two years under the sunny skies of Catalonia. In 1997, he returned to Germany to take charge of interior design for Audi.

From 2003 to 2006, Sielaff took a break from Audi at its direct competitor, Daimler Chrysler! In Stuttgart, he held the same responsibilities as at Audi and was in charge of interior design for Mercedes-Benz.

There was a further change for Sielaff in July 2015, when he succeeded Luc Donckerwolke as head of design for Bentley. There he revived the Mulliner department devoted to special orders …