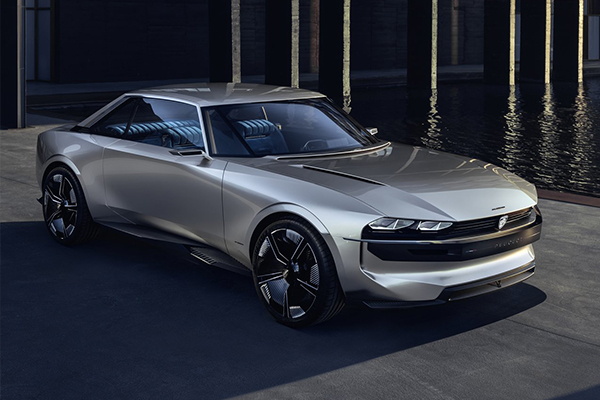 For the most part, concept cars deliver a message, and the Peugeot e-Legend was not designed without making a statement. On the one hand, it is intended to recall the marque’s heritage; on the other, it re-establishes the dominant position of gesture and the human mind.

With its e-Legend concept car, Peugeot sought to place the human being on the front line once more. At a time when driving aids are ever more common, when autonomous cars are taking shape, in this unsettling period which tends to absolve drivers from their responsibilities and to deprive them of the pleasure of driving, it is wise to put the human being at the forefront once again. This role begins a long time ahead, at the moment when a new product is conceived. In following over several months the creative process which led to the e-Legend concept car, the major star of Peugeot’s stand at the 2018 Paris Motor Show, the additional emotion, sensitivity and expertise which the human hand brings to bear can be measured.

This process began with the subject which was chosen as its inspiration: a celebration of the 50th anniversary of the 504, recalling the coupé designed and built by Pininfarina and launched in March 1969.

Like all Peugeot’s concept cars, this project was a collaborative venture between Philippe-Emmanuel Jean, in charge of the concept car programme, Mathias Hossann, head of design for concept cars, and Stéphane Strouven, responsible for planning and budgets. The discussion was moderated by Gilles Vidal, the director of design for Peugeot in the PSA group. The e-Legend concept car began with some decisive pencil strokes by Nicolas Brissonneau, one of the mainstays of Peugeot’s design studio. A graduate of the ENSAAMA School of Applied Arts, Brissonneau was immediately recruited by Gérard Welter, then head of Peugeot’s Design Centre. It was 1994 and Brissonneau was just 20. He never left the company and is now the artistic director for exterior design.

After drawing the initial sketches, the designer works closely with a ‘digital modeller’ who transfers onto screen the lines sketched out on paper. At this point, computer technology comes into play, envisioning the model from every angle, perspective and position and enabling it to adopt a realistic form.

With his historical knowledge and experience, Brissonneau captured the spirit of the 1960s while creating a contemporary object. The three main parts of the body are clearly structured and are emphasised by sharp creases. The e-Legend coupé is not an imitation of the 504 Coupé but borrows some of its characteristic features to good effect, subtly and elegantly. The interior was designed in the same vein by Christophe Pialat, who endeavoured to create a timeless environment with the help of Sébastien Floutier, the specialist in colours and materials. Within the confines of the coupé, the atmosphere recalls the past, all the while exploiting contemporary materials and juggling the contrast between velour and technical mesh. The shade of turquoise is a reminder of the colours of another age, but the material used echoes the trainers worn today. For the car’s wood trim, the team turned to a designer of furniture and other objects by the name of Nicolas Hervet. Originally from the Perche ‘département’ and from a family of cabinet makers stretching back four generations, Hervet began work in Paris some 20 years ago after studying at the Lycée Napoléon in Aigle. In 2014, he opened his own workshop at Igé in the Orne ‘département’, together with his cousin Cédric, another artist in the family and a former artistic director of the Daft Punk group who had studied at the Ecole Boulle, who is now based in Los Angeles. With the help of Juliette and Fabien on the workbenches, for the e-Legend Hervet produced some superb pieces of wood with a matt varnish and no wax, using veneers from the Pacific walnut (‘paldão’), a magnificently grained variety of wood imported from the Philippines.

The construction of the prototype was undertaken by the company D3 during the summer of 2018. The firm has quietly come to occupy an enviable position in the world of design. It was established in 1987 by Bernard Pène, who had been a studio designer at Renault. Very rapidly, D3 then became a partner to the automotive industry, producing styling bucks, prototypes and concept cars for several manufacturers. In January 2005, Pène handed over the business to his closest associate, Hermidas Atabeyki.

After the carbon-fibre body emerges from the mould, many long hours of finishing work lie ahead. Every line has to be checked, altered and optimised under the watchful eye of the designer. The modeller’s hand assesses the accuracy of the shapes, planes down the car’s contours and adjusts the tautness of its leading edges …

In mechanical terms, the Peugeot e-Legend plays the card of modernity with its electric powertrain. The two electric motors are fed by a 100 kWh battery and develop 340 kW, or more than 460 bhp. The prototype should therefore be capable of accelerating from 0-62 mph in under four seconds and reaching a top speed of 137 mph. Peugeot has announced a range of 370 miles. But this is purely theoretical; what matters for now is the emotion produced by a simple glance.