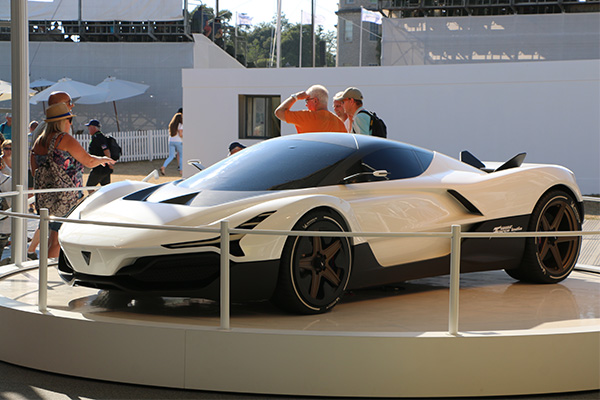 There was a pleasant surprise in store for visitors to the Michelin building at the Festival of Speed, held at Goodwood at the beginning of July. There they could see a supercar concept produced by the Indian designer Chunky Varizani. The Varizani Shul presented by Michelin at the Festival of Speed at Goodwood in July.

A graduate of the Art Center College of Design at Pasadena, Varizani learned his craft with Yamaha (May–August 2010), Volvo (January–June 2012), Land Rover (June–October 2012), Jaguar (October–December 2012) and Rolls-Royce (April–November 2013). Following this, he set up his own business, Varizani Automotive, based in Bombay, which is developing a very attractive supercar

The Shul is not the most flamboyant of supercars. Perfectly proportioned, its shape is free from decorative or aerodynamic features.

Its styling is relatively simple, uncluttered even, and quite harmonious for a concept of this kind. Its side panels are simply broken up with an air outlet behind the front wheel and a dual air intake let into the rear section ahead of the wheels. Relatively simple styling for a supercar.

There are no ill-judged spoilers and none of the fins, foils and flaps which afflict so many cars of this kind …

Like the Rimac Concept One from Croatia and the Nio EP9 from China, the Shul plays the card of 100% electric power. No exact figures have been revealed until now, but for vehicles of this kind the baseline is usually around 1000bhp! The Shul concept car will be powered by four electric motors.

Varizani expects to extend the car’s range with a turbine using technology similar to that developed by Jaguar for its CX-75 and supplied by Techrules or Hybrid Kinetic Group. The four motors mounted in the wheels are accompanied by a micro-turbine which drives an electric generator to recharge the battery and extend the car’s range.

In addition to Michelin, Varizani has a number of solid backers. Among those promoting the project are the Japanese game designer Kazunori Yamauchi, who received the Grand Prix for Creativity at the 30th Festival Automobile International in January 2015 in recognition of the many projects he has encouraged for the Gran Turismo game. A discreet ‘Gran Turismo’ logo can be seen on the bodywork. Two unobtrusive flaps direct the flow of air at the rear of the car.

The Varizani Shul can be added to the long list of incredible cars which have been created to enliven the screens of PlayStation consoles.

A further partner in the venture is the racing team Force India, which began competing in Formula 1 in 2008. Force India is headed by the Indian business tycoon Vijay Mallya, chairman of Kingfisher Airlines and United Breweries Group. Force India was born out of the takeover of Spyker, the Dutch company which went into Formula 1 in 2007, after it bought out the Midland F1 venture which was itself established in 2006 from the sale of the Jordan Grand Prix team. When it comes to motorsport, everything can be recycled! Ever since going into Formula 1, Force India has proven amazingly professional.

Since 2009, Force India’s racing cars have been powered by Mercedes engines.