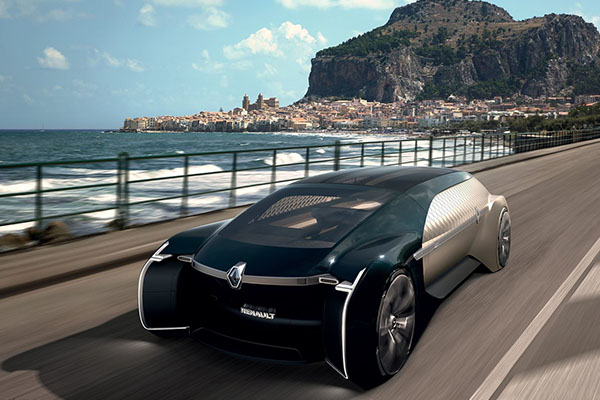 With its EZ-Ultimo project, Renault has revived the tradition of futuristic designs which the Americans called ‘dream cars’ in the 1950s.

At the last Paris Motor Show, visitors were in two minds. Some of them were enthusiastic about Renault’s vision of the future, while others found its futuristic concept cars disconcerting.

The EZ-Ultimo project undoubtedly disturbed the more conservative and rational onlookers, regardless of the angle from which they viewed it. It calls to mind the vehicles conceived in the 1970s by Syd Mead, the designer who invented the decor, architecture, cars and costumes for Star Trek, Aliens and Blade Runner. Or the position adopted by the designers working for the ‘Big Three’ manufacturers – GM, Ford and Chrysler – who expressed the affluence of the United States. The EZ-Ultimo plays on the most utopian aspect of concept cars. As can be seen every year when visiting the exhibition organised at the Invalides as part of the Festival Automobile Internationale, the term ‘concept car’ covers several different types of research project. These may be simple prototypes prefiguring production models, soon before they go on sale. Or they may be concept cars which are further removed from reality, but which provide clues as to the design direction a manufacturer is taking.

Finally, there are true ‘show cars’, heirs to the ‘dream cars’ of the 1950s and the most extreme of all concept cars. Resolutely futuristic, these free-form studies are not destined to enter production but are solely the stuff of dreams. The Renault EZ-Ultimo is one such design.

A taste of utopia

Its exterior styling inevitably recalls the ‘dream cars’ which American designers created in the Fifties and Sixties. The EZ-Ultimo is extravagant, secretive and mysterious, with a smooth, monolithic shape, rendered in an unusual blend of colours and materials. The bodywork of this spaceship juxtaposes a deep black lacquer with a hint of green and a champagne colour which sparkles with 600 silver diamond-shaped facets, finished like a one-way mirror and obscuring the view into the private space inside the car. For it is the EZ-Ultimo’s interior which is most remarkable. You step behind closed doors and into the subdued confines of a timeless boudoir with room for three. This haven of luxury and sensuality combines walnut furnishings, a marble band with a guilloche motif and mouldings made from Corian, a composite material created by DuPont. The seating – a bench seat and an armchair ­– play on the association of velour and leather. The floor is also finished in walnut, with the slats arranged in a herringbone pattern. The creators of this ambience explained that they were inspired by the atmosphere of a Haussmann-style apartment in Paris … Or when the future meets the Second Empire … On a technical level, it is of course an autonomous vehicle, inevitably powered by an electric motor, and obviously ultra-connected. Renault calls it a “robo-vehicle” which “symbolises the idea of an intimate, private journey” and represents “a carriage for modern times” or “an exploration into the shared mobility of tomorrow, seen from the emotional side”.