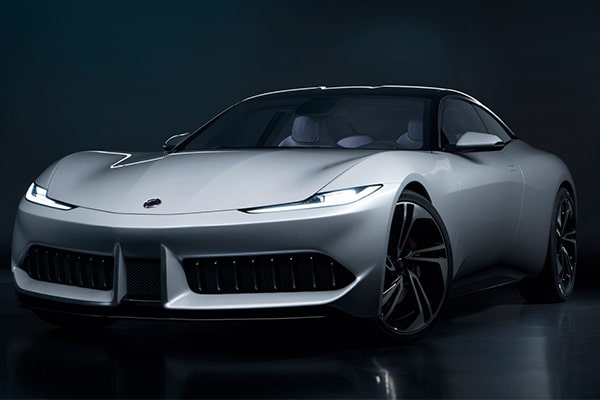 The company Karma Automotive has carried on the story of the magnificent Fisker Karma, adding a contemporary look to it from Pininfarina, as well as looking further into the future with a design from its own studios.

The Fisker Karma is one of the most extraordinary production cars of the last twenty years. Unfortunately, it has had a very turbulent career!

The pre-production prototype was unveiled at the Detroit Auto Show in January 2008, but it was only four years later, in January 2012, that the first cars officially went on sale in the United States. Four years which were spent developing the car, preparing for industrial production and creating the financing package for the operation … Four years too, during which the new company developed a complete range, at least in the form of concept cars: the Karma S coupé/convertible in 2009, the Surf estate car in 2011 and the Atlantic saloon in 2012. This smaller model was due to be built at Wilmington, in Delaware, in a factory bought from GM. At the same time, in March 2012, production of the Karma began on Valmet’s assembly lines in Finland.

The Karma has a sensual appearance to which few other saloons can lay claim. When it arrived on the market, it made all its rivals look old-fashioned. The Karma has finely-wrought lines and moves like a cat. Its shape was drawn in accordance with the standards of another age, an age when the car was an object of pleasure and desire. Its lines are extremely low-slung, hugging the ground and following the undulations of its muscular curves.

An edgy sensuality, nothing but beauty: the Karma had everything it needed to be a success, were it not that the situation at Fisker Automotive rapidly worsened. The bankruptcy of its battery supplier, A123 Systems, during the summer of 2012, resulted in production of the Karma being interrupted after 1800 cars had been built.

Production of the Karma remained on hold for several months as the Department of Energy (DoE) demanded that the loan it had granted be paid back. Henrik Fisker left the ship in March 2013 and three-quarters of the employees followed suit …

In January 2016, Fisker joined Gilbert Villareal, a businessman, and the unstoppable Bob Lutz, former boss of Chrysler and GM, to create VLF Automotive, based at Auburn Hills in Michigan. The company presented Force 1, an aggressive-looking sports coupé powered by the V10 from the Dodge Viper, and the Destino saloon, a variant of the Karma converted to use an internal combustion engine. But production never got going. In 2018, Henrik Fisker embarked on a new venture: Fisker Inc., based at Newport Beach in California. He planned to get started again with a compact model which would be less flamboyant than the magnificent Karma, the eMotion, which was first shown in January 2018. An SUV is also planned for 2021. The operation is starting to take shape: in April 2019, Fisker hired Don Jackson, a former head of production for Volkswagen and Toyota in North America.

Meanwhile, in February 2014, the Chinese group Wanxiang – which had bought A123 Systems in January 2013 – acquired Fisker Automotive, its technology, the rights to manufacture the Karma and its factory in Delaware. Karma Automotive Inc. was established in October 2015. The programme for this new company initially comprised the continuation (or rather resumption) of production of the electrically-powered Karma. For the occasion, the car changed its identity again and was henceforth known as the Revero. Last April, in Shanghai, Karma Automotive revealed its plans in the form of two prototypes. The Karma GT was based on the Revero, but completely restyled by Pininfarina in its Shanghai studio. It was a very elegant coupé with clean lines. . Looking further ahead, Karma unveiled the SC1 Vision Concept, a spectacular roadster with an electric powertrain. The design team is made up of Andreas Thurner – who worked for a long time for the BMW group – for the exterior and Andre Franco Luis for the interior. They work under the direction of Jacques Flynn, the conceptual design manager, and Paul Houghton, vice-president for design.

It seems that the future of the Fisker Karma is becoming clearer.