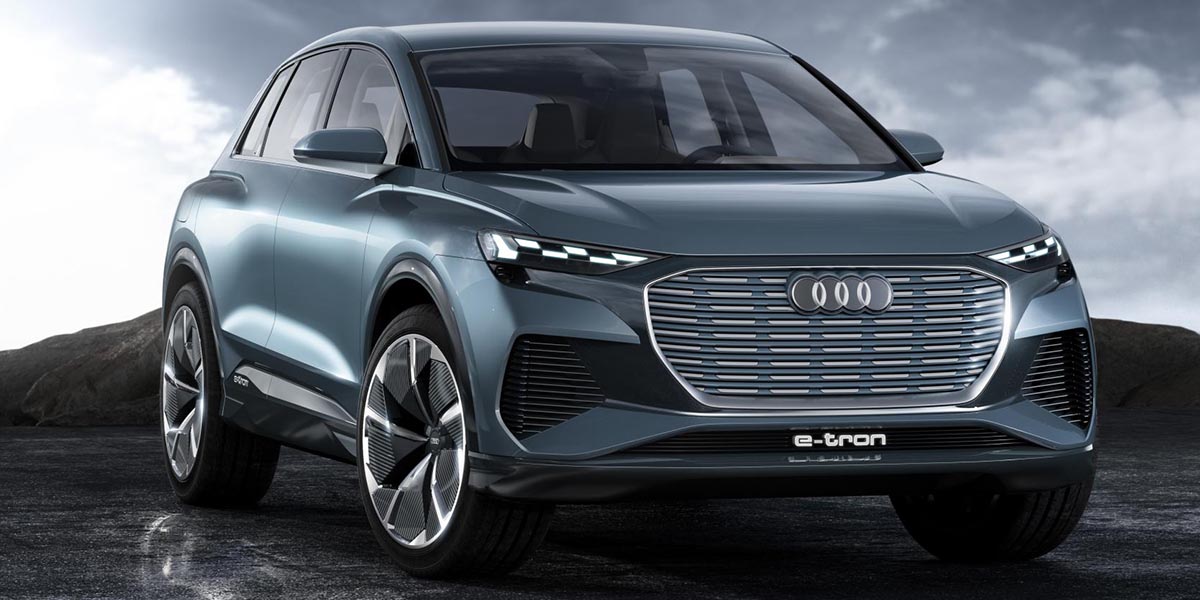 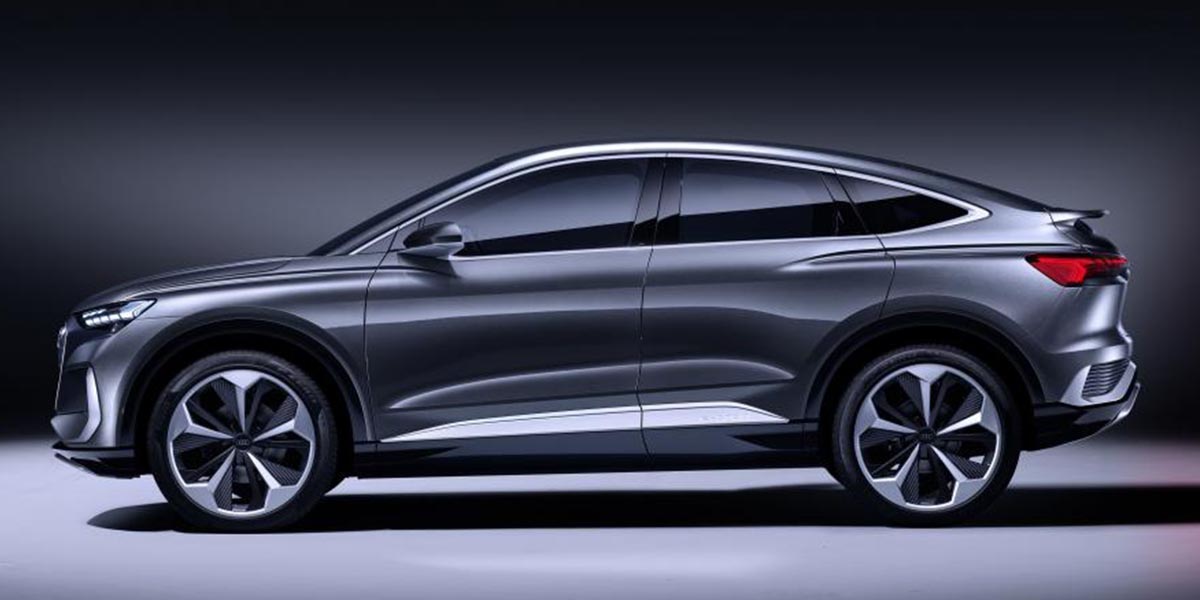 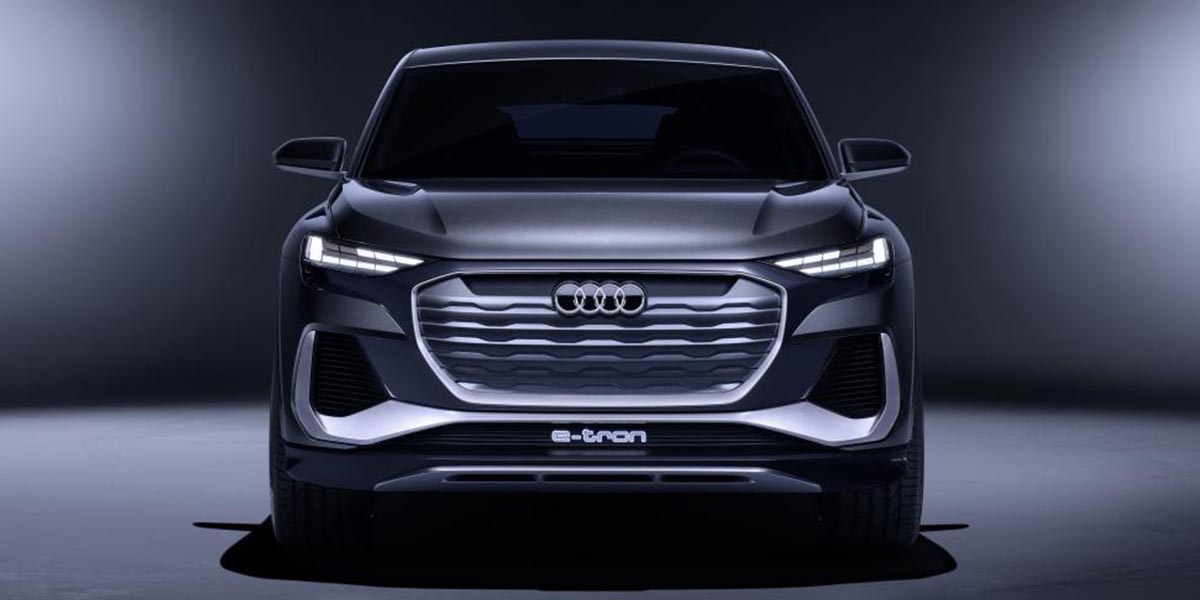 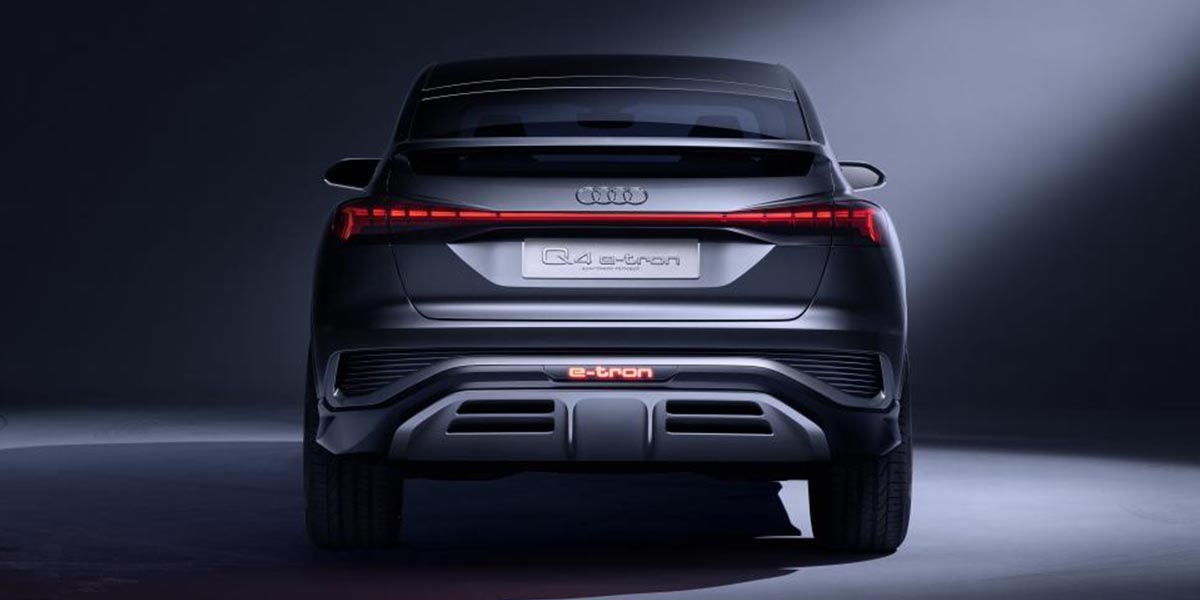 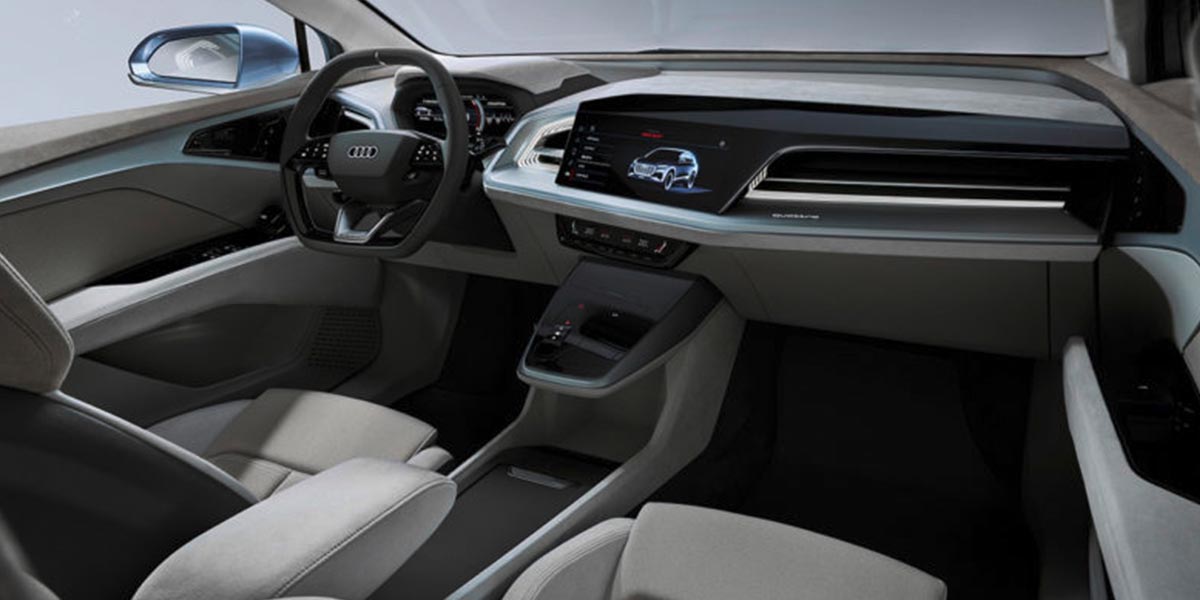 The Q4 Sportback e-tron is the second model in its range after the Q4 e-tron concept. From a technical point of view, they are identical. But in terms of shape, they each have their own, easily recognisable characteristics.

The versatility and robustness of the classic SUV or the elegance and dynamism of the coupé version. The dimensions of the two Q4 models are almost identical. With an external length of 4.60 metres and a height of 1.60 metres, the Sportback is only one centimetre longer and lower. In terms of width (1.90 metres) and wheelbase (2.77 metres), the two versions of the Q4 are identical.

Both concept cars, which already offer a clear overview of the range of top-of-the-range engines that will be fitted to the future series-produced model, also feature the same transmission technology. Two electric motors provide 225 kW (306 hp) in the Audi Q4 and the Q4 Sportback e-tron concept. As with most Audi models, the engine power is provided by the quattro all-wheel drive system. Thanks to their excellent driveability, both versions of the Q4 achieve 0-100 km/h in just 6.3 seconds, and the top speed is restricted to 180 km/h.

A large battery with a capacity of 82 kWh takes up most of the space in the underbody between the axles. The range of over 450 kilometres, in accordance with the WLTP standard, sets the benchmark in this category. Versions with rear-wheel drive will offer a range of over 500 kilometres, according to the WLTP standard. The technology of the Q4 e-tron concept is provided by the Modular Electrification Platform (MEB), which will be integrated into a large number of electric vehicles produced by the Volkswagen Group in the future, from compact to upper-medium sized vehicles. The Audi Q4 Sportback e-tron concept offers an insight into the seventh series-produced electric vehicle, which the manufacturer will launch in 2021.

All in curves: the exterior
The Sportback’s profile is oriented downwards at the rear in a subtle and dynamic curve. The roof line joins the steeply sloping rear quarter pillars and ends with a horizontal spoiler at the lower edge of the window. The new Audi Q4 Sportback thus appears to be much longer than its sister model, the Q4 e-tron concept.

The wide light strip connecting the two lamp clusters at the rear end of the Audi Q4 Sportback e-tron concept has been added to remind the driver of one of the components of the Audi Q4 e-tron concept. It is clear that these two models belong to the same family, with the link to the e-tron Sportback* being obvious. These similarities can be seen in the interior of the headlamps, where the surface of the LED segments is also reminiscent of one of the components from the previous model. The striking design of the rear diffuser, with its horizontal slats and the e-tron logo in the centre, is common to both versions of the Audi Q4.

Seen from the front, the single-frame grille with the four-ring logo announces the Q4 Sportback e-tron concept as a member of the Audi family. At a glance, buyers will identify it as an electric model. As with the first Audi series-produced car with an electric motor, the new concept car also features a closed, structured surface within a wide, almost vertical octagonal frame instead of the traditional radiator grille.

Another classic feature of Audi’s visual identity is the projecting four-wheeler vanes, which have differentiated the carmaker since the legendary quattro in 1980. The extended design of the Q4 e-tron concept and the Q4 Sportback is fluid and organic, and adds a special touch to the vehicles’ profile. A typical feature of the e-tron is the accentuation of the underbody between the axles, where the battery and the SUV’s power plant are located. The large 22-inch wheels leave no doubt as to the potential of the latest addition to the Audi family.

The Q4 Sportback e-tron concept is painted in Kinetic Grey, a new light metallic colour with a pearlescent finish that takes on an emerald hue depending on the light. In contrast, the lower bodywork is painted in dark grey. This segmentation highlights the width and horizontal orientation of the vehicle structure.

An impression of space: the interior
With its dimensions, the Audi Q4 Sportback e-tron concept also ranks in the top third of compact vehicles. Occupying little space on the road, the electric SUV is a versatile and agile model. Inside, however, its 2.77-metre wheelbase puts it in the top category. With no transmission tunnel limiting space, the Audi Q4 Sportback e-tron concept is surprisingly spacious and comfortable, with plenty of legroom up front and even more in the rear.

The colour scheme reinforces the feeling of space. Warm, light colours dominate the upper part of the cabin, contrasting with the dark floor mats. The roof canopy, window pillars and the upper part of the door and dashboard rails are covered with beige and white microfibre fabric. The Audi Q4 and Audi Q4 Sportback offer durable choices beyond their electric drive,

with a floor covering made from recycled materials. Instead of chrome metal frames, the surfaces are covered with several layers of high-quality paint. Frosted and painted Plexiglas on the applications creates an intense depth effect. Four seats with integrated headrests are comfortably upholstered in Alcantara with an exceptional quality finish, and the upholstery is embellished with thick double-thread stitching.

The Audi virtual cockpit display, which shows the most important information (speed, load level and navigation), is located behind the steering wheel. New features include a large-format head-up display with augmented reality option. It displays important graphic data, such as directional arrows for turning, directly on the route.

Control panels designed as tactile elements on the spokes of the steering wheel can be used to select frequently used functions. In the middle, above the centre console, a 12.3-inch touch screen displays and manages infotainment and vehicle functions.

For added comfort, it is tilted towards the driver. A row of buttons to control the air conditioning is located below.

As the centre console does not need to contain any functional elements, such as a gear lever or handbrake controls, it is designed as a large storage compartment with a mobile phone holder. The transmission mode selector switch is integrated into a well-designed horizontal space, which also covers the front section of the console. In addition to the conventional lower storage compartment, the specially moulded, easy-to-reach upper part of the doors can hold bottles. 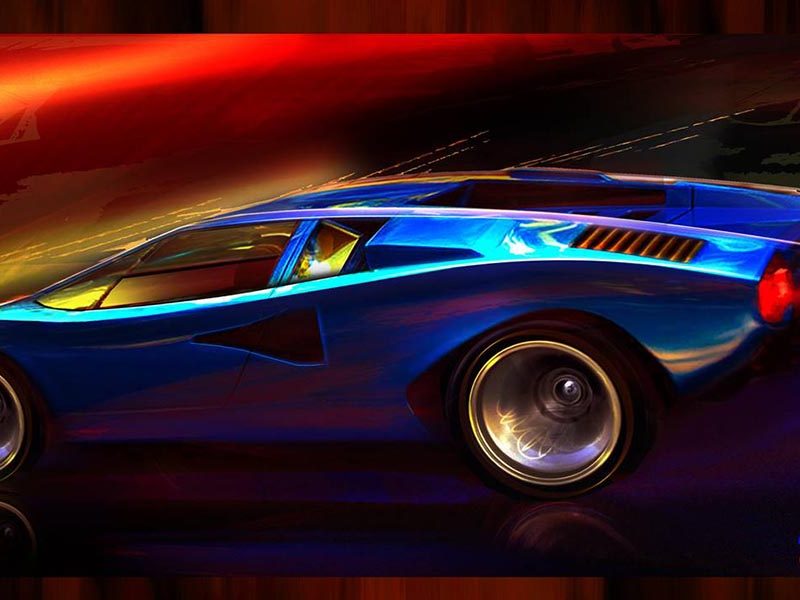 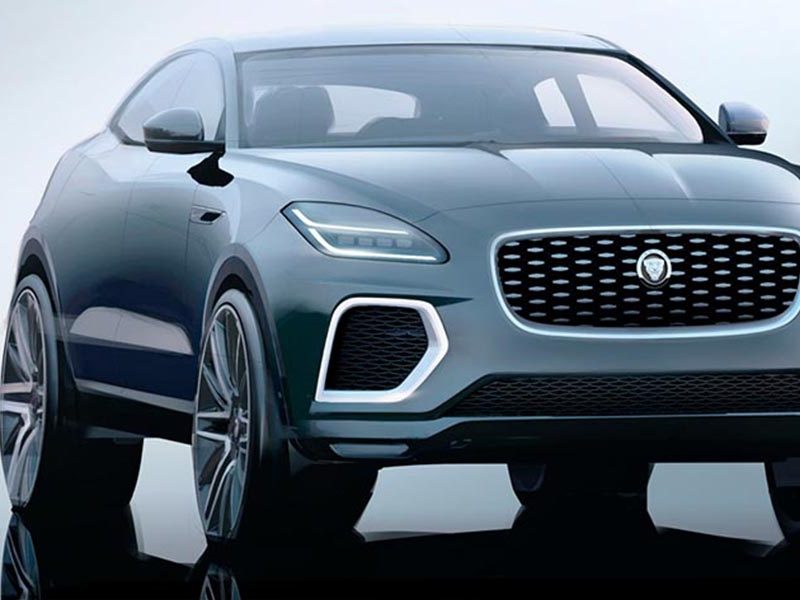 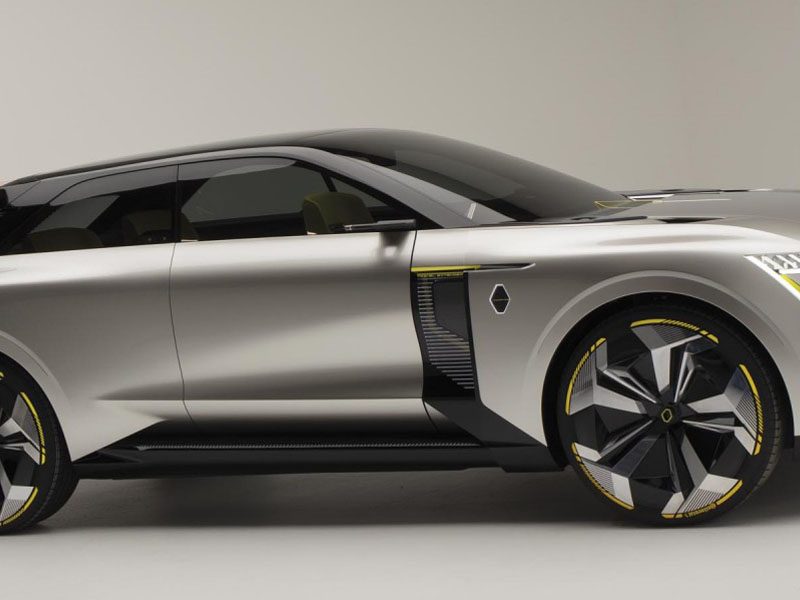