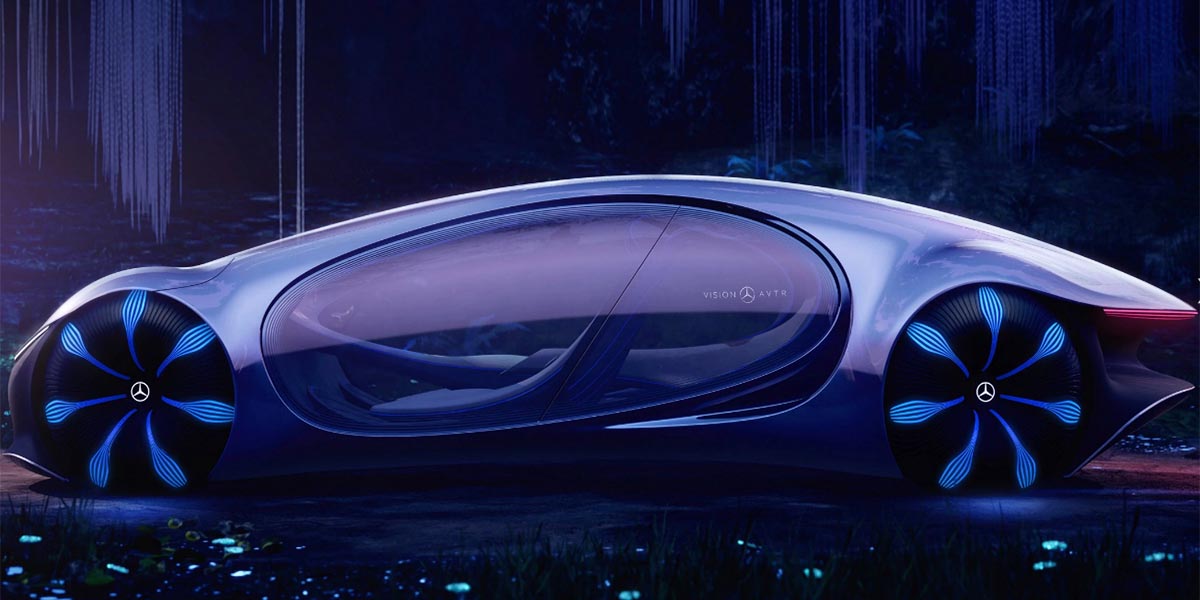 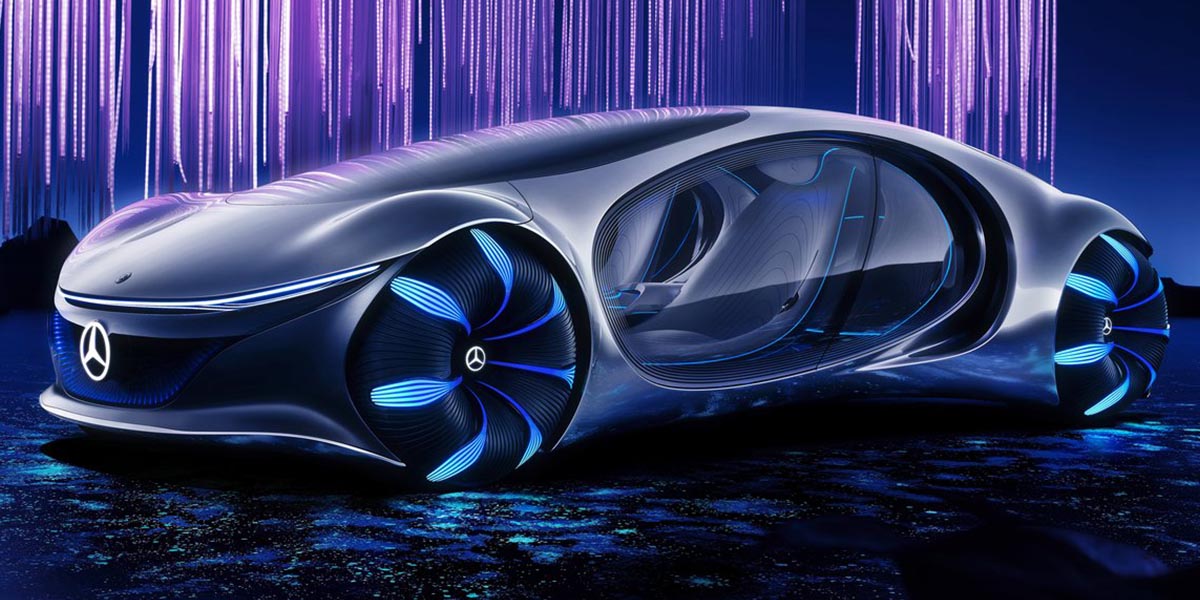 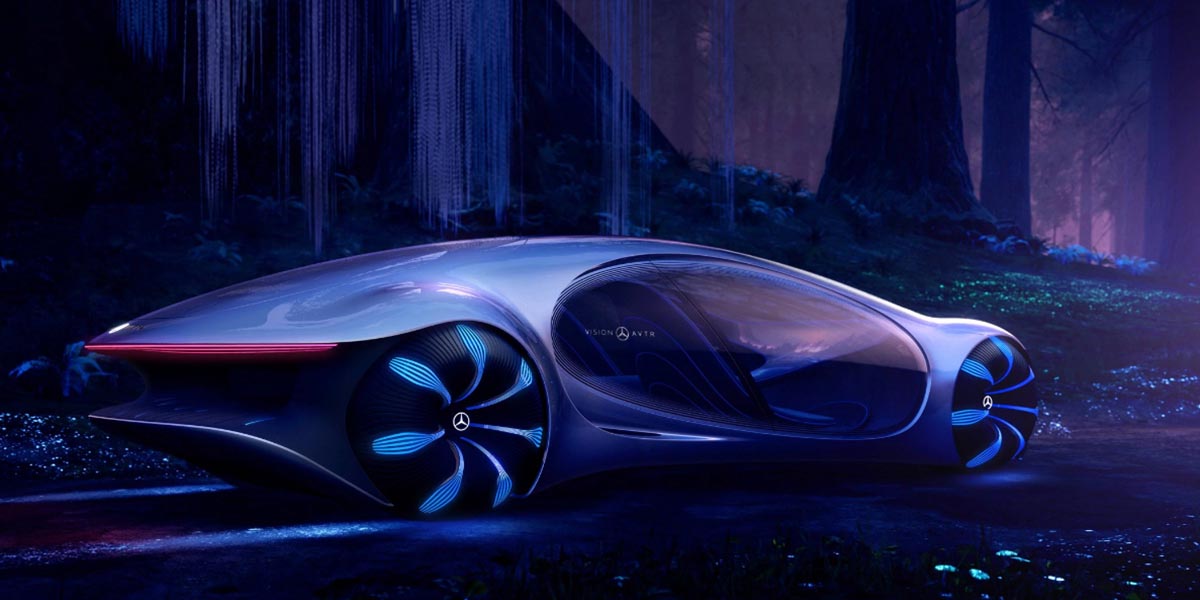 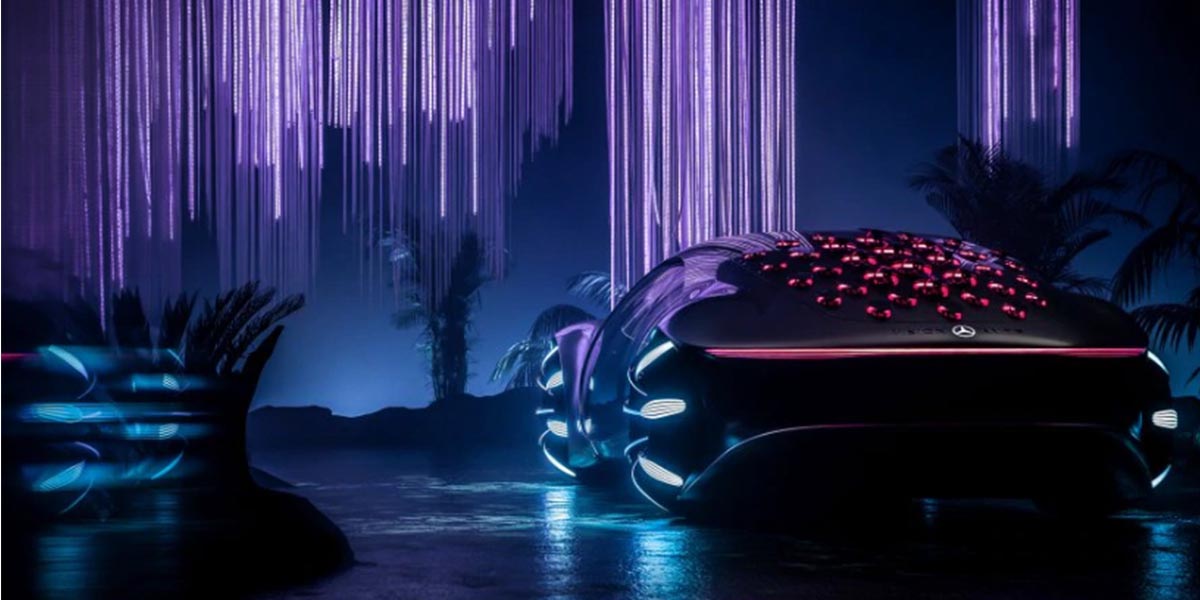 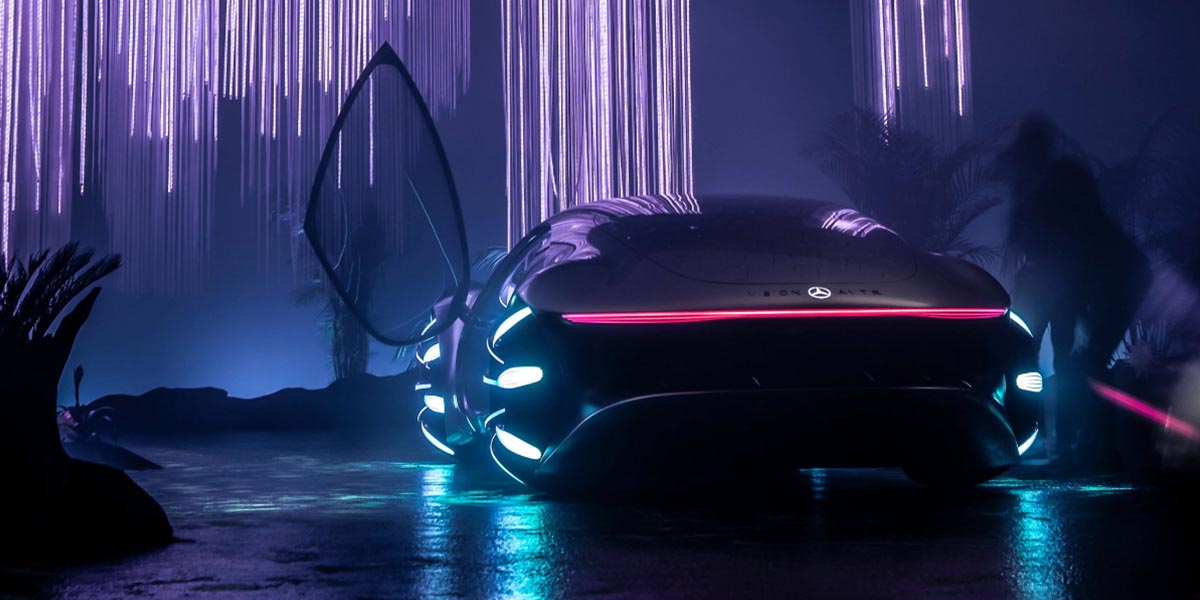 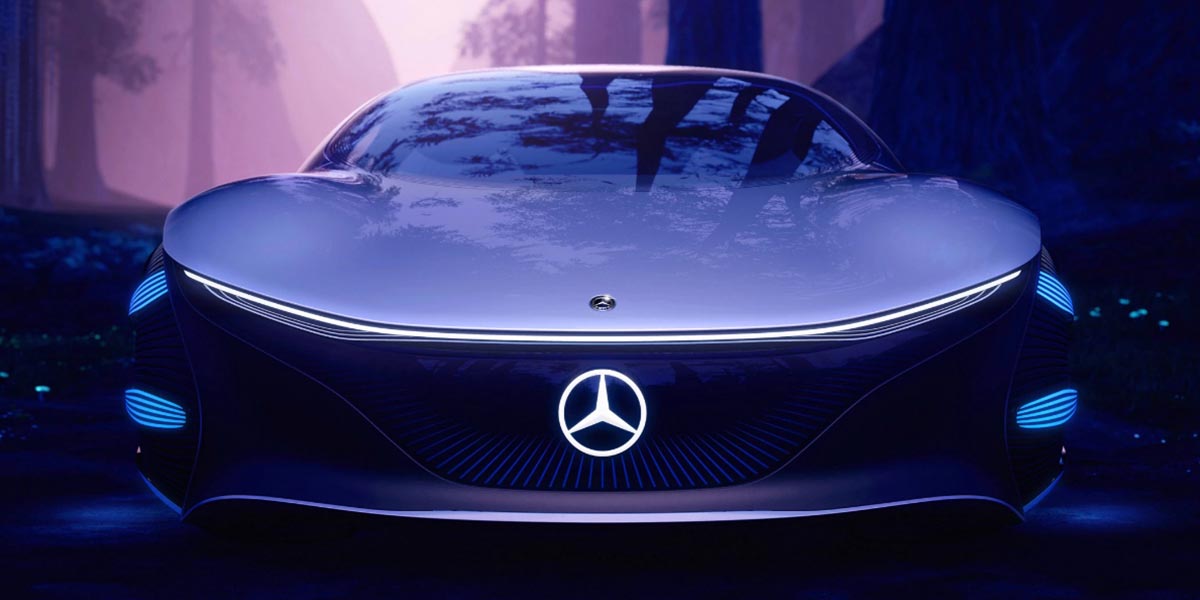 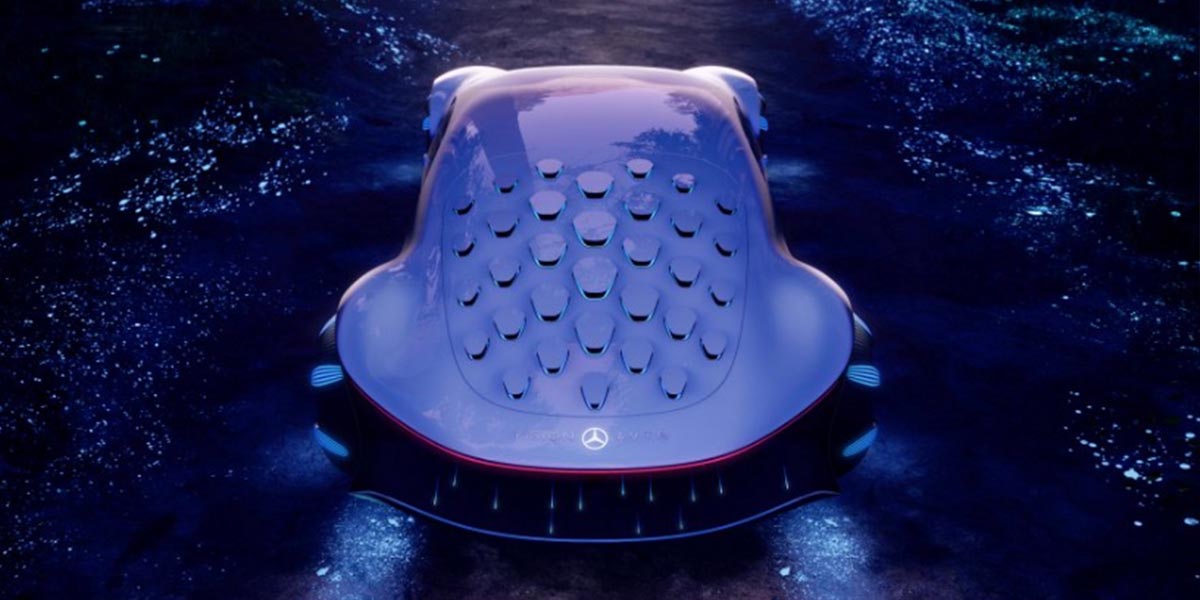 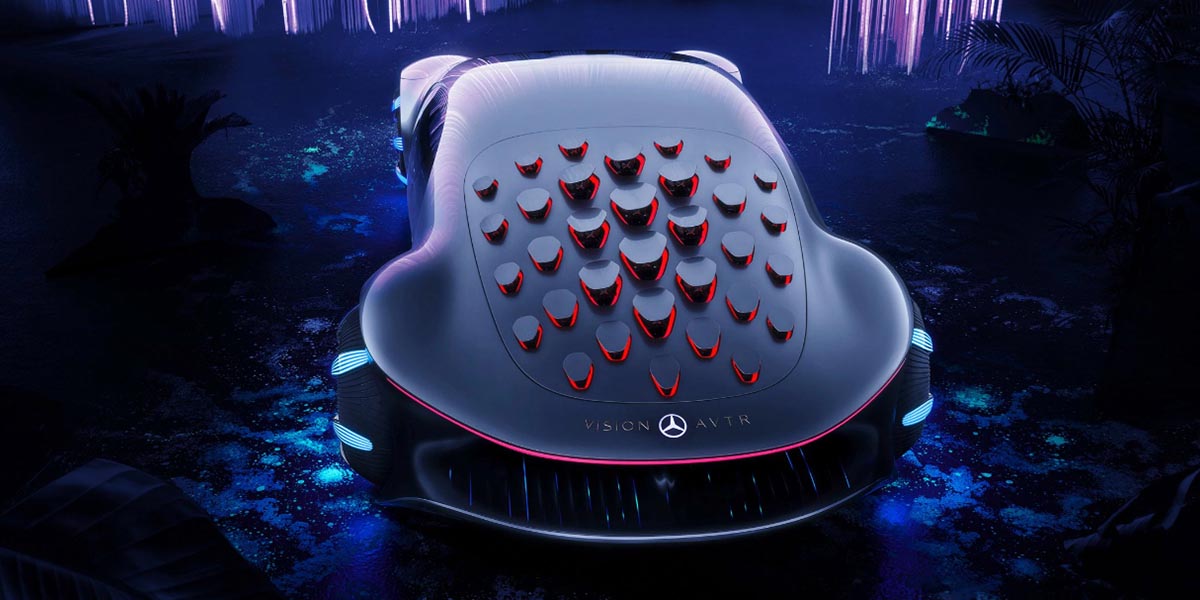 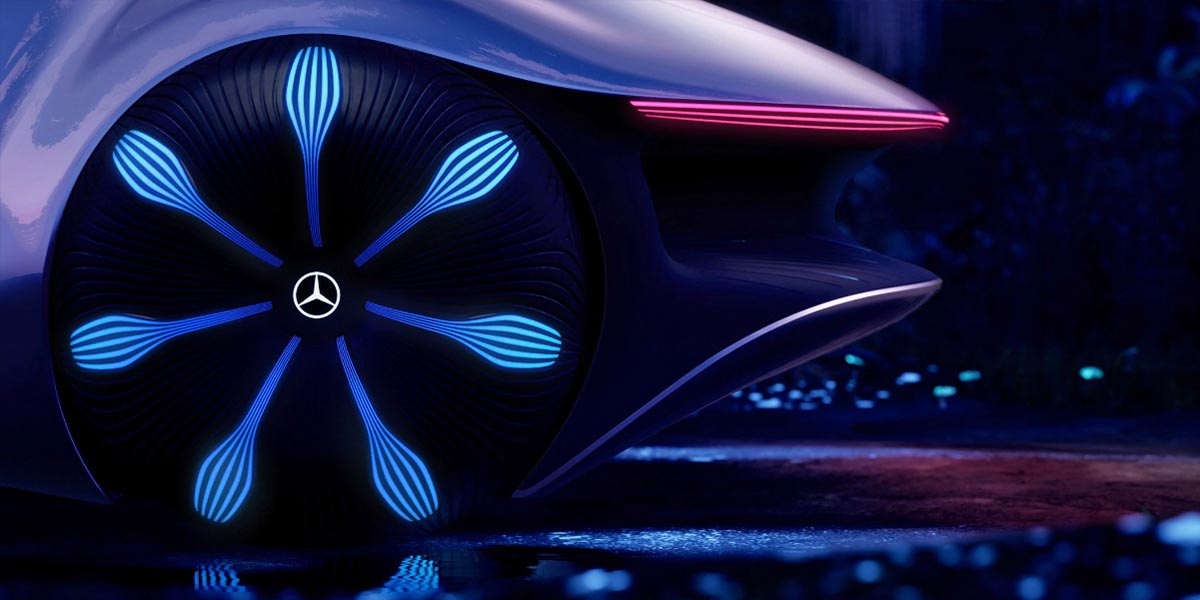 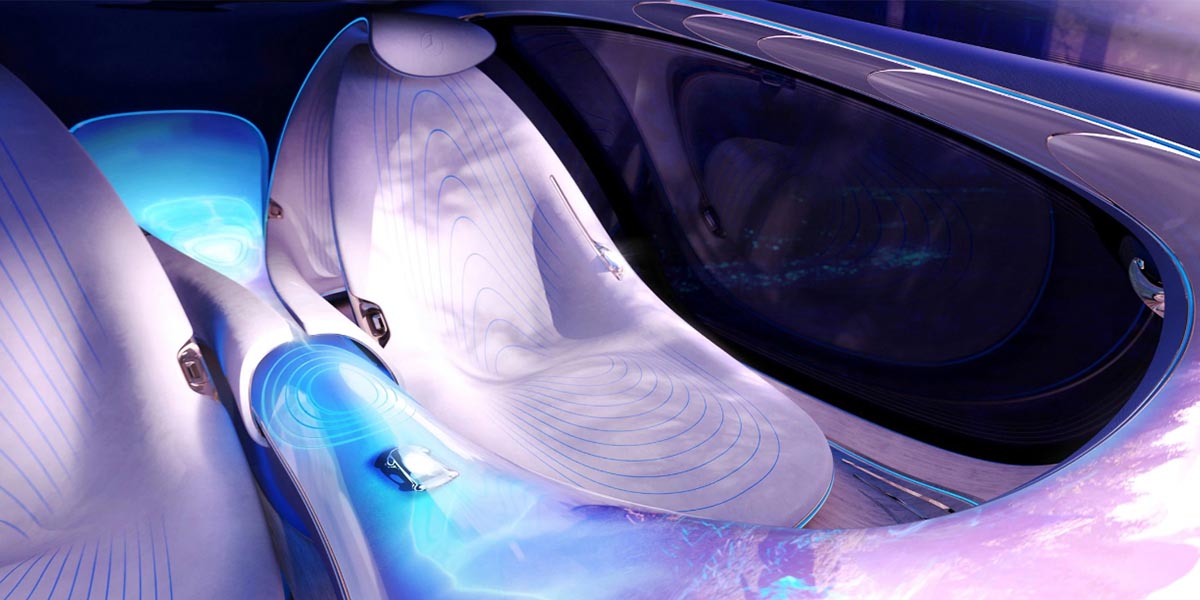 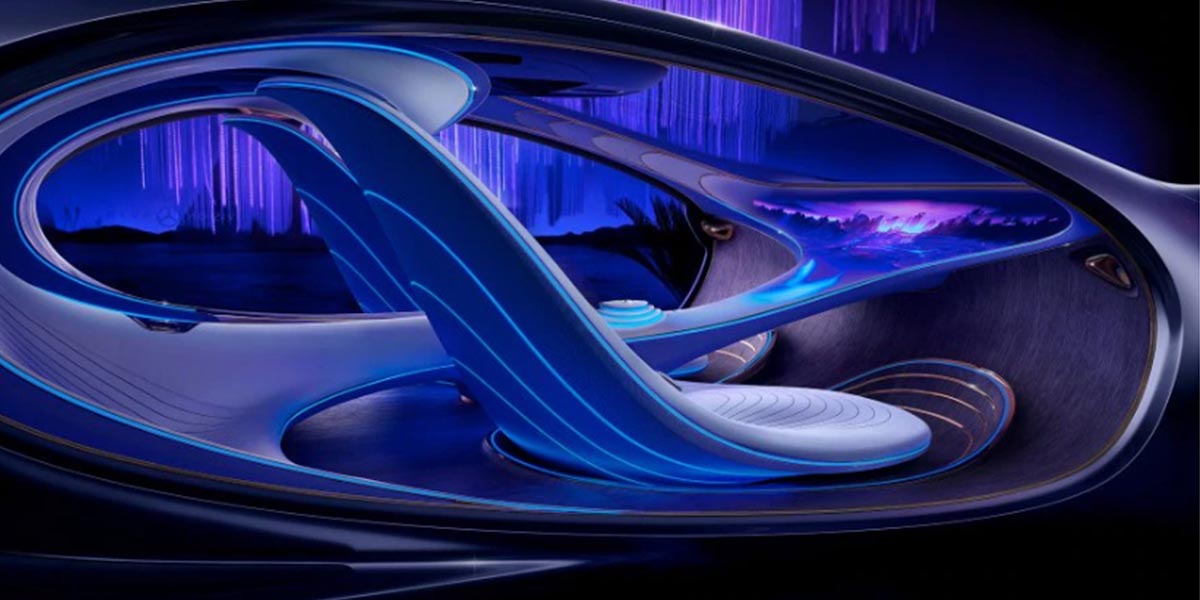 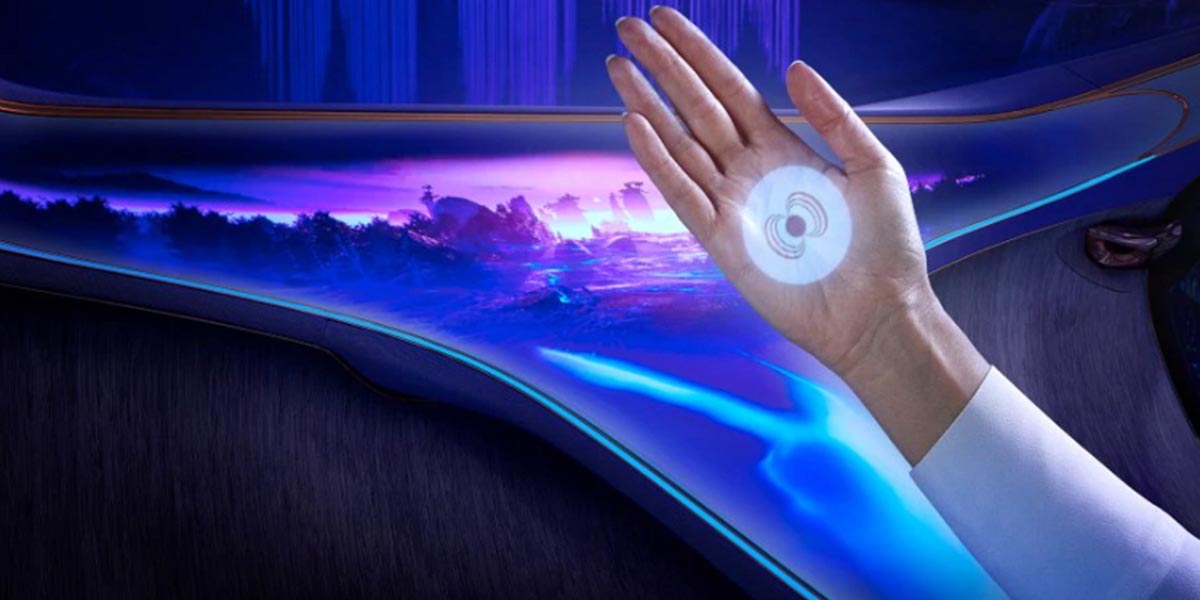 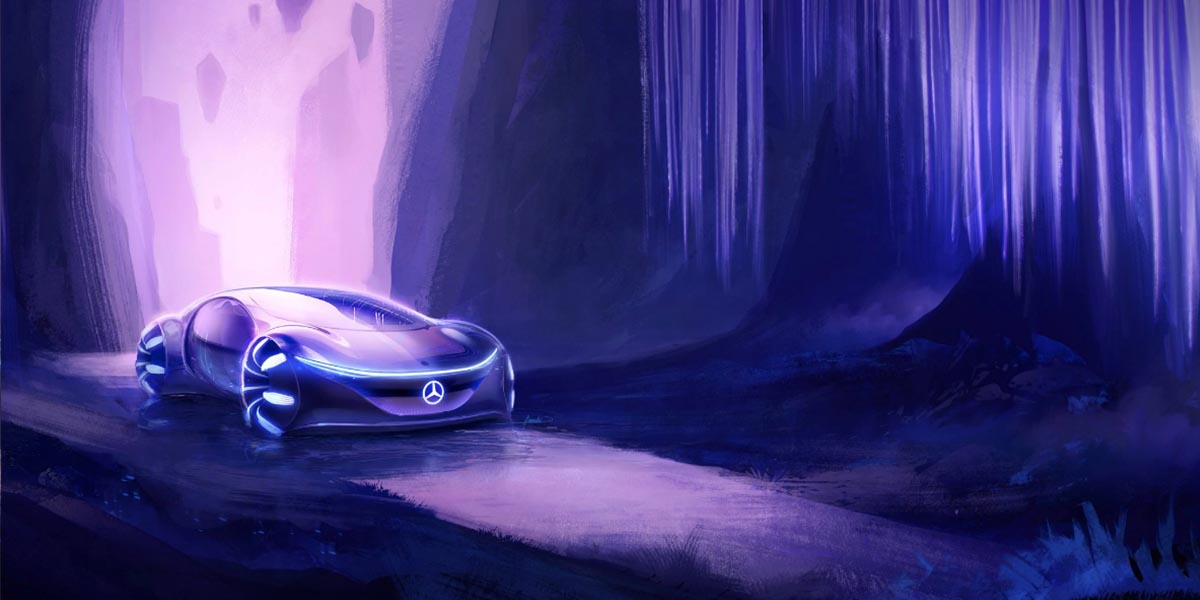 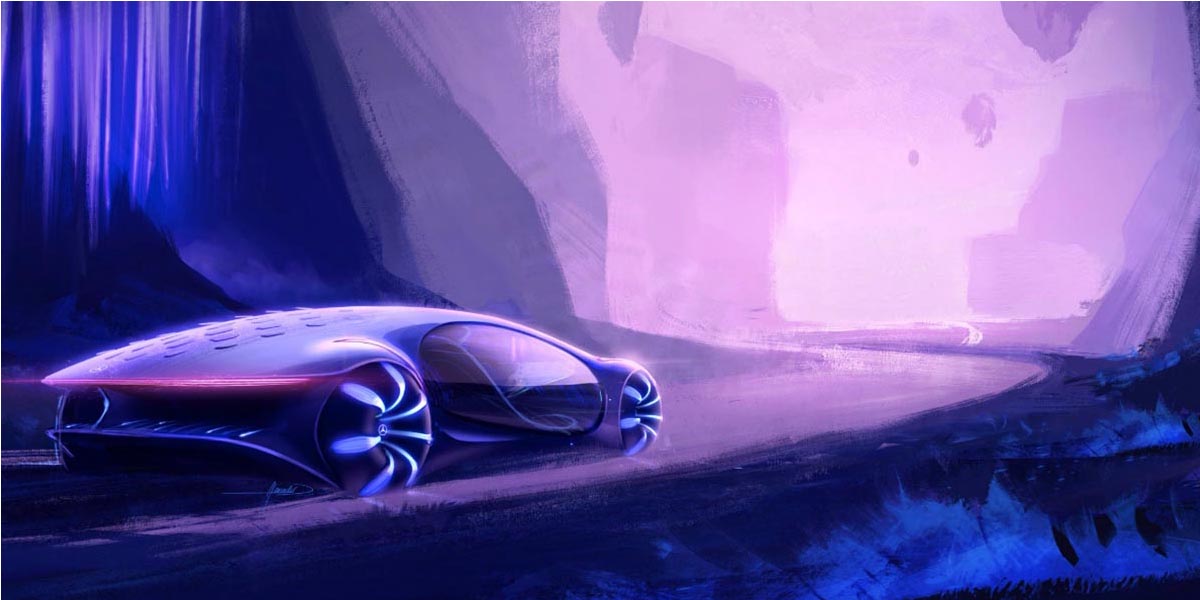 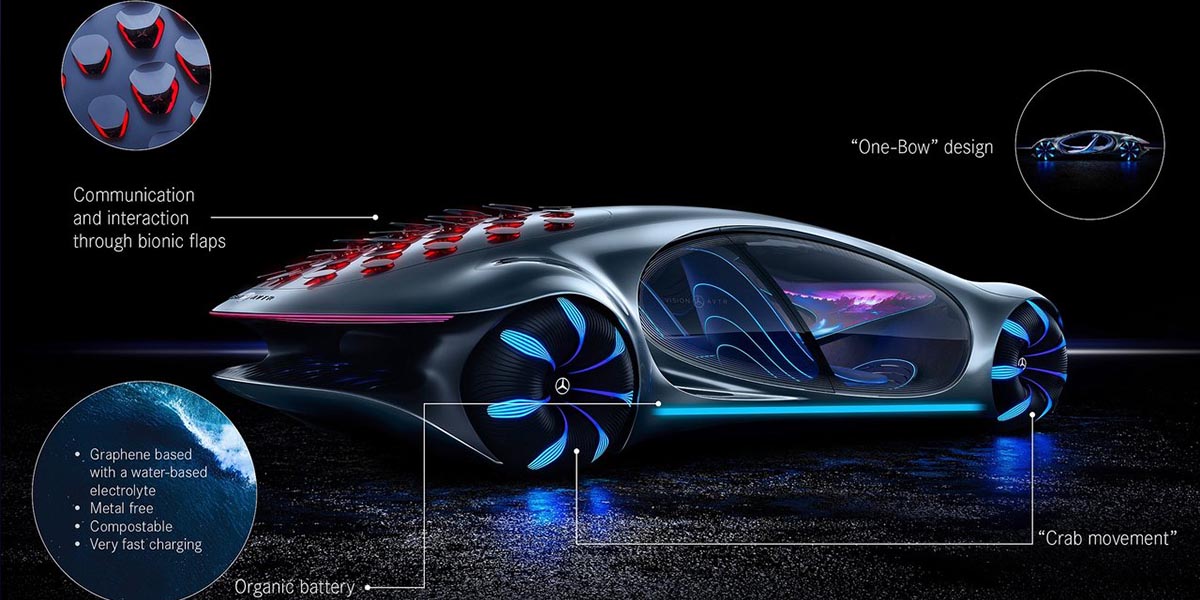 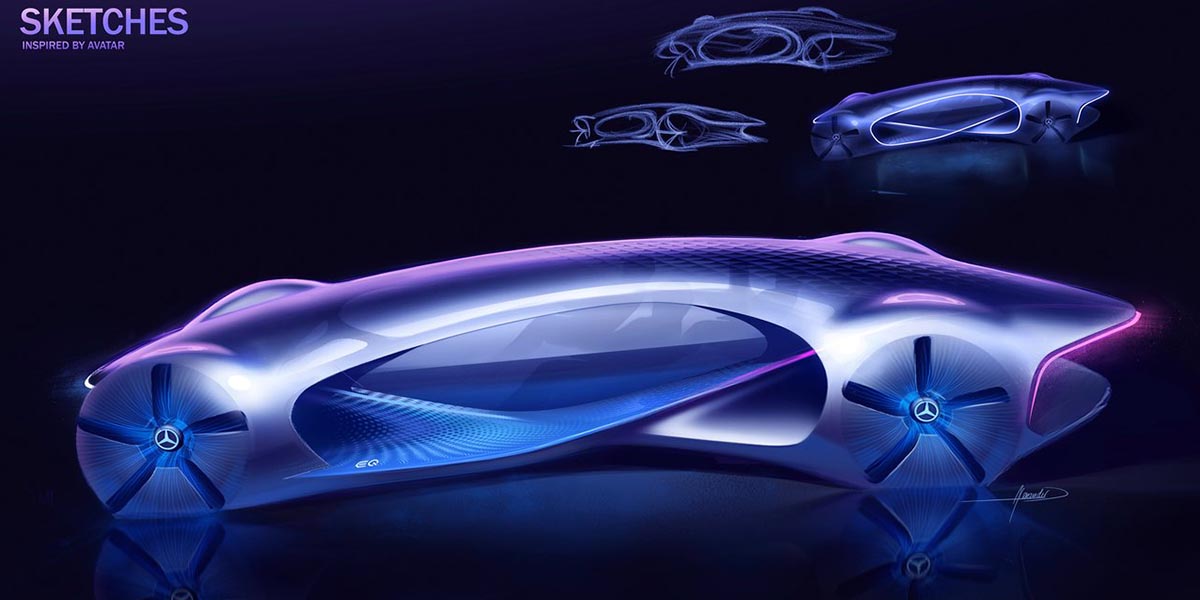 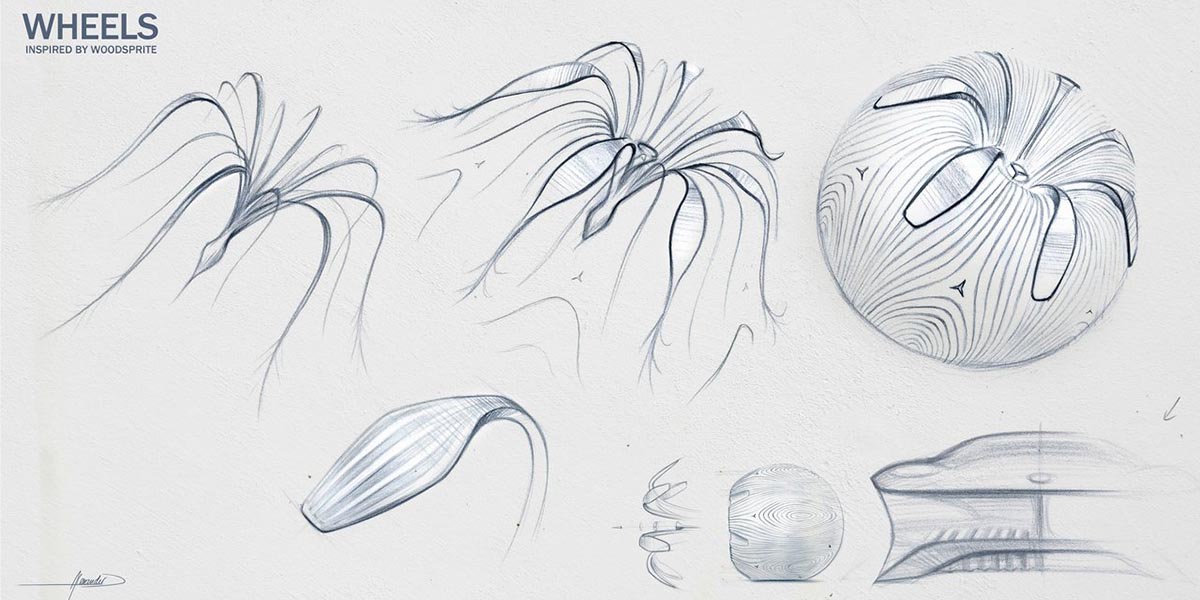 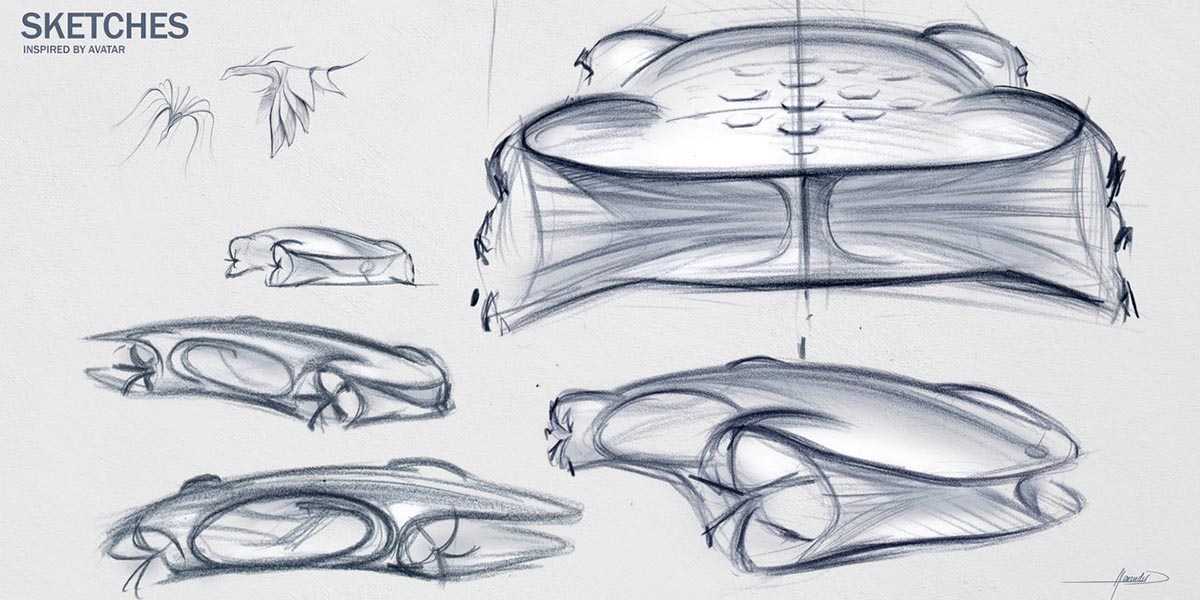 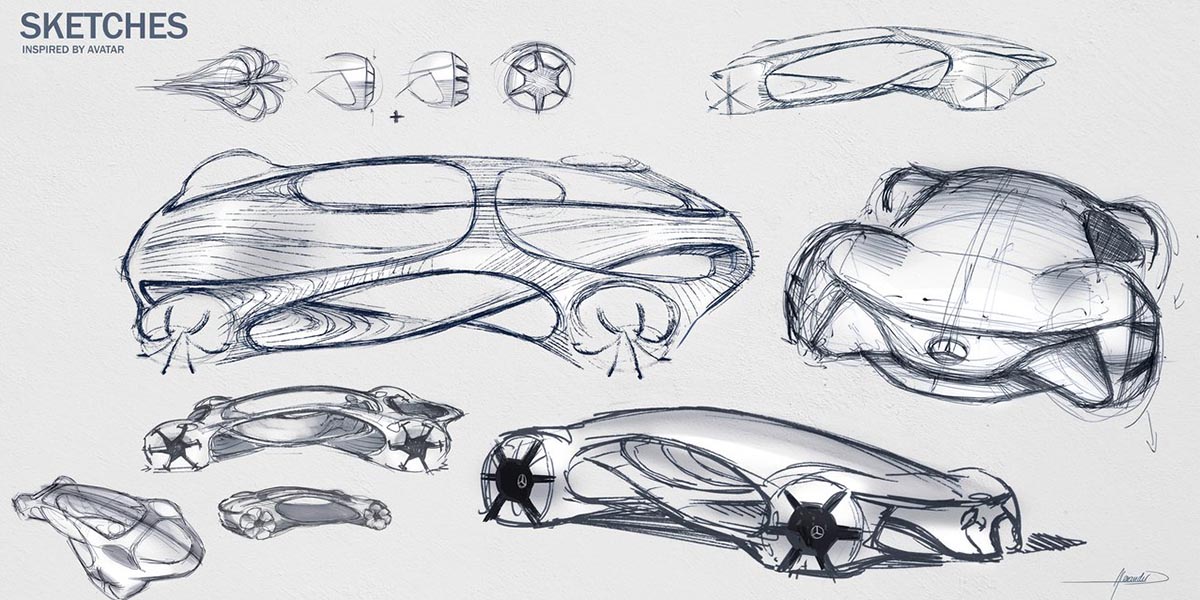 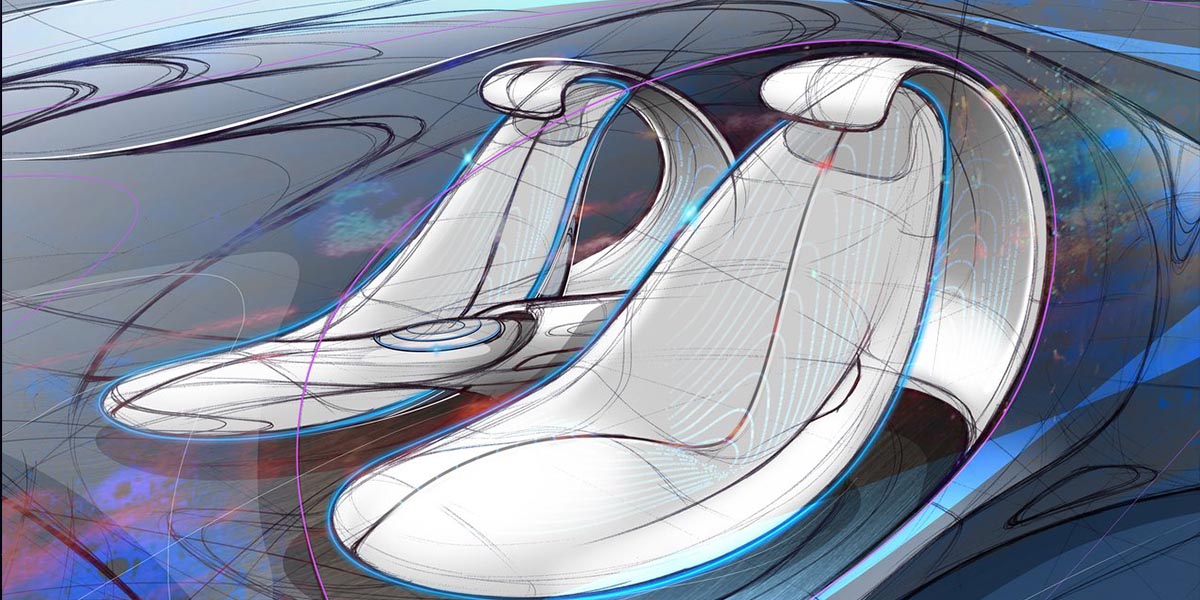 Winner of the Grand Prize
Most Beautiful Futuristic Car

The name of this revolutionary concept vehicle is not only the result of a close collaboration with the AVATAR team for the development of the show car, but also of the advanced transformation of the vehicle. This concept vehicle embodies the vision of Mercedes-Benz designers, engineers and trend researchers for mobility in the distant future.

Extremely confident – and completely emission-free
With its four high-performance electric motors close to the wheels, the VISION AVTR embodies a particularly agile implementation of the vision of a dynamic luxury sedan. With a combined engine power of more than 350 kW, the VISION AVTR sets a new benchmark in EQ Power.
Thanks to the intelligent, fully variable torque distribution, the power of the four fully individually controllable engines is not only managed optimally in terms of driving dynamics, but above all very efficiently. The innovative all-wheel drive with torque vectoring allows completely new freedom and guarantees driving dynamics at the highest level while offering the best possible active safety.
This means that each wheel can be driven separately and according to the driving situation. Thanks to the possibility of driving the front and rear axles simultaneously or in opposite directions, the VISION AVTR can move sideways by approximately 30 degrees, unlike conventional vehicles. This so-called “crab movement” gives the concept vehicle a reptile-like appearance even in its movement.

Organic battery technology
The VISION AVTR was designed with its innovative electric propulsion in mind. It is based on a particularly powerful and compact high-voltage battery. For the first time, the revolutionary battery technology is based on the organic chemistry of graphene-based cells and thus completely eliminates rare, toxic and expensive earths such as metals. This makes electromobility independent of fossil fuels.
An absolute revolution is also the recyclability through composting, which is 100% recyclable due to its materiality. In this way, Mercedes-Benz underlines the great importance of a future circular economy in the raw materials sector.

Exceptional rapid load capacity
In addition to exponentially high energy density – compared to current battery systems that can reach 1,200 Wh/liter – the technology also impresses with its exceptional fast charging capacity thanks to automated conduction charging technology. This means that the battery will be fully recharged in less than 15 minutes. This innovative technology also allows maximum flexibility in terms of space: with a local minimum of 94 millimetres, the battery is ideally suited to the concept of a space-shared vehicle, maximising the multifunctional interior.
With a capacity of approximately 110 kWh, the VISION AVTR allows an electric range of more than 700 kilometers. By recovering during driving and braking, the high-voltage battery can be recharged with greater efficiency than systems established during driving and thus contributes to the high energy efficiency of the entire system.

Masterpiece of efficiency
At Mercedes-Benz, the consideration of efficiency goes far beyond the drive concept, because with increasing digitalization, the performance of the large number of so-called secondary consumers also comes into play – as well as their efficient energy supply, without negatively affecting the drive power of the vehicle itself. Energy consumption per IT operation is already a key objective in the development of new computer chips.
This trend will continue in the coming years with the development of sensors and artificial intelligence in the automotive industry. The neuro-inspired approach of AVTR VISION, including so-called neuromorphic hardware, promises to reduce the power requirements of sensors, chips and other components to a few watts. They are powered by the cache current of the solar plates integrated into the back of the AVTR VISION. The 33 surface elements with multidirectional movement act as “bionic shutters”.

Interior and exterior merge together
For the first time, Mercedes-Benz has worked with a completely new design approach in the development of the AVTR VISION. The holistic concept combines the disciplines of interior, exterior and UX design from the first sketch. Man and human perception are the starting point for a design process from the inside out. The design process starts with the passenger experience and consciously focuses on the perception and needs of the passengers.
The goal was to create a car that extends the perception of its passengers. It was also to create an immersive experience space in which passengers connect with each other, the vehicle and the surrounding area in a unique way.

Durable materials
Large areas such as the back shell of the seat and the sky are decorated with a color-changing fabric inspired by the world of sea colors. Depending on the light, the fabric changes color from dark blue to subtle light blue. These seats are refined with DINAMICA® vegetable leather. DINAMICA® is the first and only microfiber that guarantees environmental sustainability throughout the production cycle.
It is a recycled material made from old clothes, flags and PET plastic bottles. During production, special attention is paid to the reduction of polluting emissions and low energy consumption. Thanks to its versatility, maximum performance and high quality, DINAMICA® is suitable for use in the interiors of luxury cars. It also guarantees slip resistance for passengers on the seats. The softness of the material gives the occupants a feeling of “welcome home”.Intuitive control
The AVTR VISION already responds to the approach of passengers by visualizing the flow of energy and information in the environment thanks to digital neurons that cross the grid, pass through the wheels and move towards the rear area. The first interaction in the passenger compartment between man and vehicle is completely intuitive via the control unit: by placing your hand on the center console, the passenger compartment comes to life and the vehicle recognizes the driver by his or her breathing. This is made visible on the dashboard and on the user’s hand.
The AVTR VISION thus establishes a biometric connection with the driver and increases his awareness of the environment. The digital neurons move from the inside to the outside and visualize the flow of energy and information. For example, while driving, neurons move outside the vehicle. When changing direction, energy flows to the corresponding side of the vehicle.